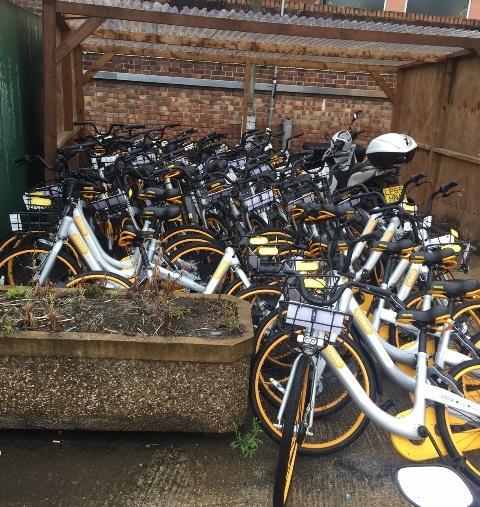 Responding to the growing number of dockless bike-share firms operating in the capital, Transport for London (TfL) has published a code of practice for operators.

Obike launched in London in July, and has been followed by ofo and Urbo. Mobike – which has been operating in Manchester – launched in Ealing yesterday.

In July, responding to concern about the arrival and rapid expansion of dockless bike share schemes, the European Cyclists Federation published a position paper featuring a list of best practices to help towns and cities manage their arrival.

TfL has now published a code outlining requirements and recommendations that operators will be expected to follow.

Announcing the move, TfL said: “Dockless cycle hire has potential to make cycling more accessible and attractive for Londoners. While we welcome responsible bike hire initiatives, dockless bike operators need to work with TfL and London boroughs to make sure that schemes do not have a negative impact on other cyclists, road users and pedestrians or result in unlawful highway obstruction.”

In China, where most of the major operators originated, many cities have found their pavements blocked by large numbers of parked bikes. The TfL code states that bikes must not cause ‘nuisance or obstruction’ and operators will be treated as responsible for the use of any bike they own or manage.

When clustering of bikes occurs, operators must have the capability to remove and redistribute them.

The firms will also be expected to operate within strict geographic controls. This has been an issue in Bath where Yobike, operating from nearby Bristol, has been accused of trying to enter the local market uninvited.

Firms will be asked to maintain their bikes regularly, such that they meet all legal requirements, and where a bike is considered a danger, TfL is asking that it be removed from service within two hours.

Operators are also being asked to provide cycling advice to users via their mobile apps and to share anonymised data about usage with TfL and local authorities.

“We are proud to be leading the way with responsible bike-sharing – developing our own UK charter, working with local bike shops to maintain our bikes and paying all employees the London Living Wage.”