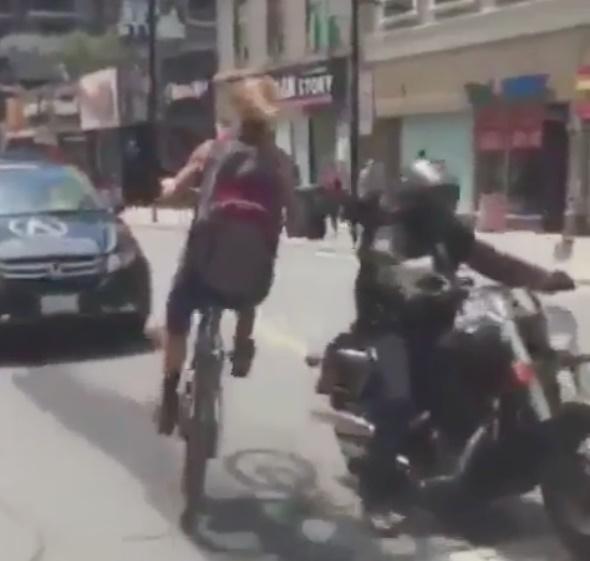 Video: Canadian cyclist charged with careless driving for weaving in and out of traffic while doing a wheelie

A Toronto cyclist has been charged with careless driving for weaving in and out of traffic and riding on pavements while doing a wheelie. The man in question says he will continue to wheelie, but only while obeying traffic laws.

CBC reports that the video of the incident was first posted to Instagram by @mylittlebikeshop in June.

Police noticed it and made a request for more information, saying:

“Thanks for the video, great riding skill, but dangerous cycling behaviour… YOU now have our attention.

“Your video shows evidence of careless driving under the HTA, as well as several by-law offences.  You have put several pedestrians in harm’s way as a result of your actions.

“Road safety is a shared responsibility and this type of disregard for safe riding on city streets does not forward the cycling agenda in the City of Toronto, and puts you at risk of serious injury or death.”

The My Little Bike Shop account responded: "It's kind of heartbreaking to see my little poppa wheelie clip being posted on the Toronto police Instagram account... I say heartbreaking because my video is surrounded by surveillance videos of murders, stabbings, shootings, robberies and sexual assaults."

In a statement this week announcing the careless driving charge, police said: "The cyclist weaved through traffic, rode on the sidewalk, failed to signal lane changes, failed to yield to pedestrians, and failed to stop for a red light."

The cyclist is due to appear in court in October.

In a post last week, My Little Bike Shop said: "Despite me being a very skilled and experienced rider, I did break multiple laws.

"I plan to continue to do wheelies in the city. However, I will stop going on sidewalks, into oncoming lanes and through red lights for now."