Vecchiojo looks at next year's mud pluggers… and ponders...
by VecchioJo

Trotting round the halls of Eurobike there seems to be little evidence of the UCIs recent rule change allowing disc-brakes into the top-flight of cyclo-cross competition. Certainly round these parts 'cross bikes are still seen as pure racing machines where the inappropriateness of riding a bike with brakes that don't work much is all an essential part of the appeal, and if you've ever been to a 'cross race in Europe you will see that the appeal runs four-deep along the side of the track. With flags. And beer.

So maybe there's no need to change. Or maybe manufacturers haven't yet had a chance to react to the news and bring out a suitable model, or maybe simply racers don't want or need them. Or maybe the Europeans are wise enough to see that cyclo-cross bikes are great for racing but rubbish for mucking about on or being a bit of a do-it-all bike, for that you'd want a lightweight 700C disc-wheeled bike but with flat bars and proper disc-brakes, cos that would be sensible yet fun. It must be, because there were *a lot* of those kind of bikes around. Or maybe no-one's doing anything until one of the big manufacturers brings out a credible hydraulic system that works with STI-style units. There was a loose handful of bikes with little cable-to-hydraulic converter units zip-tied under the stem, a small company called Cleg made the tidy if agricultural box and we'd like to get a chance to throw one down a muddy slope to see how it feels. There were a few instances of 'cross bikes using cable discs but as a gritty cable can make them perform worse than a set of cantilevers and almost as bad to set up whilst being heavier then they're not overly popular. Or maybe European cyclo-crossers just weigh less so don't need to bring a heavy moving object to a stop. There's not much that changes in cyclo-cross from year to year, call that either no need to change what mostly works or a resistance to change, there's not much to report, barring some exceptions it's all nips, tucks and subtle evolution.

The big boys of the European cyclo-cross scene Stevens and Ridley were both showing their eurothrash ranges with racer-led flagship models. The Ridley was a joy of fast-white carbon with rainbow-stripe detailing and hidden cables while the Stevens was a joy of fast-white carbon with smaller rainbow-stripe detailing and a graphics package to match it's German heritage. Given less prominence and generally moved around the stand so it wasn't in the way was the tidy Stevens "La Hanka", the same top-flight team carbon bike but with cable discs.

Other big Euro brand Focus, who have had a disced-up 'cross bike proudly in their line-up in the past were only showing a canti-braked cyclo-cross range this year, and very nice it was too, with some elegant moulded carbon action going on, BB30 and all. Their brace of bikes that could be described as "cross-bike style" with 700C tyres and racey angles with disc-brakes all had flat bars. Also from Germany were the Fixie. Inc boys with their long term standard-bearer of the disced CX thing, the "Pure Blood". It's morphed into something new for 2011, gone is the elegant, stylish and almost spindly red and white version to be replaced by this new strangely chunky yellow beast that looks uglier and heavier in our eyes. The fork crown is an, um, solid unit and the whole seat-stay arrangement looks Eastern-Bloc, it probably has a lovely personality though and they're doing some nice things with hidden cables. If you're a fan of riding your 'cross bike into walls this could be the one for you. Bianchi were showing their new carbon "Cavaria" frame (it's named after the World’s course where a Bianchi won several times) in that trademark color and a radically (we'd never say ugly) maniplated top-tube looking to provide stiffness up front and a comfy platform for shouldering.

The seldom seen Orbea "Terra" had some neat touches, a bolt on rear-cable hanger, an unique way of dealing with cable routing along the top-tube, dramatically bent chainstays and that nice seat-clamp from their road bikes too. if you wanted to stand out from the crowd this would be the one to have. At the other end of the Iberian pit-lane were new boys Hispania bikes debuting a range of simple looking road and cyclo-cross frames with the "Cross", "Barrizal" and "Grillo" titanium, aluminium and steel CX frames respectively, all of them painted in a flat colour. The first two are pretty tradtional 'cross frames with some sweet touches but the steel "Grillo" is the interesting one with a sloping top-tube and disc-brakes giving it a rufty-tufty bring-it-on appeal. An annecdote to all the carbon and aluminium swoopy cleverness and cookie-cutter frames these were a palette cleansing treat and we'd happily take any of them home to show mother, and then treat them dirty. 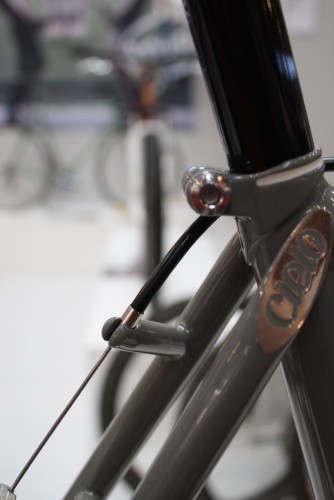 The much-desired Speedvagen, the cross bike from those lovely people at Vanilla across the pond in Portland where cyclo-cross is like a plague, was a wonderful statement in boutique frame-building with attention to detail being at a heart-aching high. The left-hand rear Pauls cantilever being painted baby-blue to match the baby-blue graphics on the left-hand seat-stay was enough on it's own to induce an involuntary knee-tremble without even looking at all the other chi-chi details that are lovingly dripped onto the frame. From the same town comes the Cielo, a frame emerging from under the roof of Chris King, the famed high-end component maker. Like the Seedvagen it's a fine example of artisan frame-building but here is built with a more traditional theme, nothing that could be called innovating or exciting but just beautifully beautifully beautifully executed with exemplary detail. 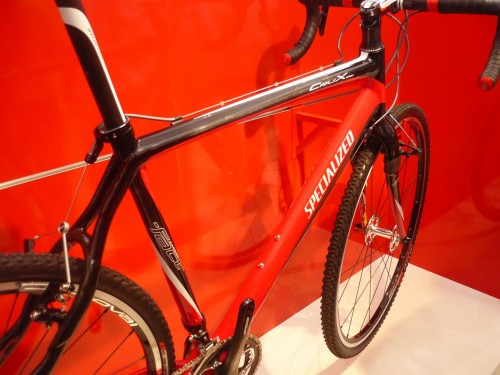 Also from the States but in slightly more mainstream territory, it took some searching (in a corner at the back by the helmets) but we found the new Specialized "CruX" 'cross bike. The carbon "CruX Expert" version on show had their Zertz inserts in the seatstays for their claimed comfort and the FACT cankle fork up front and it was wearing a pair of the new "The Captain" cross tyres which looked purposeful and are on the list to try. We wondered if the Crux would see the end of the terrible "Freeroad" moniker but a brief flick through the catalogue reveals this to be a false hope, maybe next year.

Surly had their ever-popular Cross-Check and Long-Haul-Trucker bikes on display where a simple change of colour made them look about 5lbs lighter apiece and considerably more desirable to boot. And sticking in the "S"s, Salsa had a 'cross presence with their Chili Con Crosso aluminium and La Cruz Ti bikes. Back in old Blighty the Ti "Freezer" CXer and the stablemate "Filter" steel version were gathering lots of attention on the Charge Bikes merry-go-round. The frame-and-fork only Freezer was looking very bling dressed up in the finest that a 'cross bike should ever want while the Filter was more workmanlike but no less attractive because of it, and probably the one we'd try to unbolt from the stand to be fair, because we could leave it outside the chip shop. Deliberately fudging the boundaries was the Nakisi from Voodoo. Is it a drop-barred 29er mountainbike or is it a fat-tyred cyclo-cross bike with discs? Is it Monster Cross? Who knows, and who cares, but in good ol' steel and able to be run geared or singlespeed it looks more fun than a barrell-full of shaved monkeys covered in honey. Kona were pretty pleased with the new Major Jake in carbon, the boys from north of the 49th parallel have always been a bit shy of the plastic and string and it's the first time the top-end Canadian cross bike has gone full carbon. With a tapered head-tube, BB30 bottom-bracket and square down-tube it oozes a speedy winner vibe and it's good looks have filtered down to the popular Jake The Snake and Jake cyclo-cross models that are smarter than they've been for a few years.

Component wise there never usually much new to get excited about as 'cross kit is traditionally just road kit adapted to fit, and some canti brakes from the shed, but Campagnolo obviously feel it's a muddy field worth ploughing as they had a corner of their stand dedicated to their new CX range. Their CART- CycloCross Advanced Racing Technology (TM) is essentially some of their road chainsets with lower Q factors and up and downshift zones specially designed for 'cross (hmmm) and better sealed bottom-brackets (hmmm) and wheels with better seals too. Hmmmm. Avid had their Ultimate Shorty brakes hanging from their stand in two guises, wide or narrow, the narrow for greater power and seat-stay mounted heel-clearance, or the wide sticky-out version for greater mud-clearance. The brakes come with a cable adjuster that's thankfully becoming increasingly standard practice and a spring-tension system that reminded us of mid-80s cantis, they're even anodised.
Tufo had a tyre that looked like it might offer some grip for once, Bontrager had a couple of offerings, Continental had a handful of tyres that went up to a chunky 700x42 and the Hutchinsons in a shiny silver-grey looked plain slippery frightening.

Saving the best for last we're just going go wander back to the Giant stand one more time to have a look at their new top of the line CXer, we'll stroll past Cannondale to have a final look at the "SuperX" and then try and find that All City "Nature Boy" singlespeed 'cross bike again before walking up to the Giant TCX-W women's specific 'cross bike and wondering if that's the first production one and what a good idea that is, and then pop round the corner to look at the new Giant-TCX-Advanced-SL, possibly the pinnacle of the genre. Full carbon-fibre, integrated seat-mast, tapered head-tube, and hidden cables throughout with the rear-brake cable emerging from the back of the seat-tube. Designed without compromise, designed to be raced, designed to be fast, where you only need brakes to scrub speed, not slow you down. as it's meant to be.