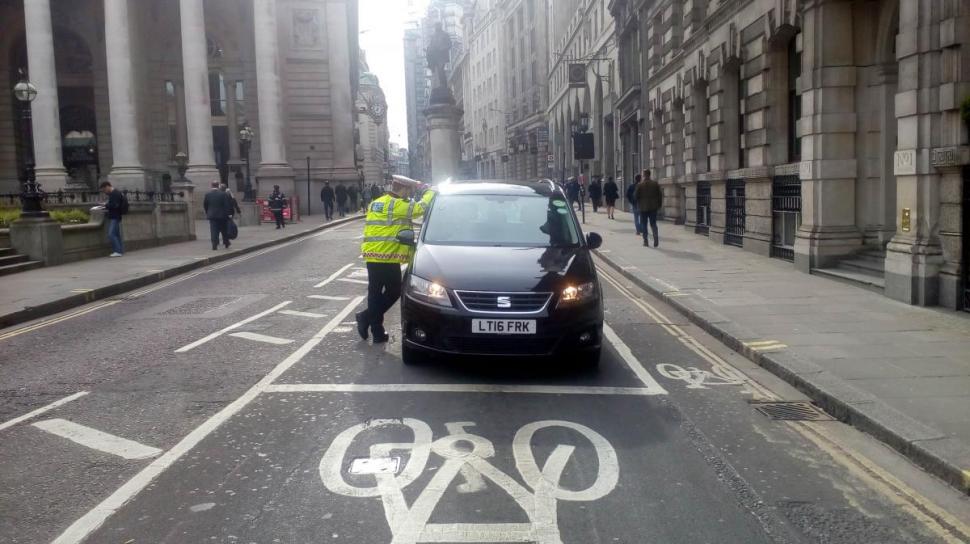 Updated: More than 9 in 10 drivers complying with Bank Junction ban

MP had accused City of London Corporation of banning vehicles for financial, not safety reasons
by Simon_MacMichael

UPDATED: The City of London Corporation says that more than nine in 10 motorists are complying with a ban on vehicles other than buses and bicycles at Bank Junction.

The local authority that governs the Square Mile began an 18-month trial of the ban, which applies from 7am to 7pm on Mondays to Fridays, in May this year, and was responding to comments made by a Conservative MP who claimed the ban was motivated more by a desire to raise money through fining motorists who ignore it, rather than for safety concerns.

The ban, which is currently being undertaken on a trial basis, is aimed at making the junction safer for vulnerable road users, whether on foot or on a bike, as well as improving air quality and relieving congestion on the bus routes that run through it.

In a statement, the Corporation said: “Our number one priority for the experimental scheme at Bank junction is to improve safety. For too long it has been one of the capital’s dangerous hotspots.

“We have made every effort to inform the public of the traffic restrictions.

“There are over 100 road signs and advance warnings in the area advising drivers about the closure to vehicles and we used the services of a sign expert to ensure these were as clear as possible. We also initially issued warning letters when the scheme started. >

“The objective of the Penalty Charge Notices is to act as a deterrent. >

“Any funds generated from the scheme will be held in reserve and as required by legislation directed towards funding various highway or road maintenance improvements.

“We now see less vehicles pass through the junction during the 12 hour restriction than would pass through in an hour, before the scheme was implemented.

"This equates to over 90 per cent compliance to the scheme.

"As a safety scheme, our end goal is to see 100 per cent compliance at the junction."

The introduction of the ban in May was welcomed by cycling campaigners, who had lobbied for safety improvements at the junction since the death there of 26-year-old Ying Tao in 2015, when she was crushed by a lorry as she rode to work.

While the City of London Corporation initially sent warning letters to motorists caught flouting the ban, in June it began fining them, with vehicle registrations captured using seven cameras equipped with Automatic Number Plate Recognition (APNR) technology around the junction.

Nevertheless, large numbers of motorists are continuing to drive through Bank Junction outside the permitted hours.

The Daily Star reports that an average of 1,498 drivers were fined each day between 7 June and 17 July, according to a Freedom of Information request.

With a fixed penalty notice of £130 being issued to transgressors, total fines during that period were almost £200,000 a day.

The newspaper extrapolates that to being equivalent to almost £50 million a year – although that figure, equivalent to around 375,000 individual fines, seems to assume that drivers would not change their behaviour after being caught the first time.

Charlie Elphicke, Conservative MP for Dover, told the Daily Star: “The cameras on this junction are fleecing motorists for £200,000 a day.

“Many people would say this looks like a case of revenue-raising rather than anything to do with traffic safety.

“Cameras [that] are simply there to raise revenue cause big resentment and are incredibly unfair,” he added.

Following Ying Tao’s death, the campaign group Stop Killing Cyclists held a vigil and die-in at the junction that was attended by hundreds of riders.

When the ban was implemented in May, the group’s co-founder, Donnachadh McCarthy, said it was an “historic day for cyclists and pedestrians in London.

He added: “We congratulate City of London for taking the steps to change the lifestyle for cyclists in the city.”

The introduction of the restrictions was also welcomed by Green Party London Assembly Member Caroline Russell, who described Bank as "a notoriously dangerous junction."

She said that incidents in which vulnerable road users are injured or killed "are happening to our friends and neighbours.

In a guest blog published on road.cc in January this year, Christopher Hayward, chairman of the City of London Corporation’s Planning and Transportation Committee, outlined details of the experimental safety scheme.

The aim was “to improve the safety of road users and pedestrians with the aim of reducing casualties and improving air quality at one of London’s busiest junctions,” he wrote.

He continued: “A number of casualties and fatalities have highlighted very real concerns about safety at this junction.

“With cyclists now making up to 50 per cent of the traffic crossing the junction in peak times, we felt that it was fundamental that cyclist safety be seen as very important.”

He added that the City of London Corporation hoped the restrictions on motor vehicles would lead to a reduction in casualties of between 50 and 60 per cent.