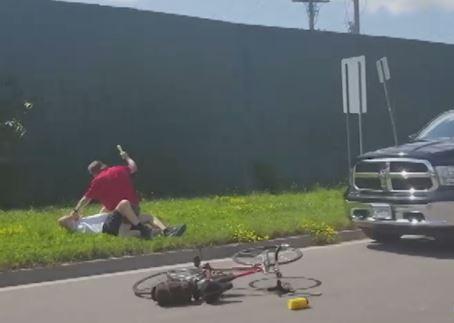 Driver arrested in Canada after being filmed clubbing cyclist, 74 (+ video)

A motorist has been arrested in Canada and charged with aggravated assault and assault with a weapon after he was filmed repeatedly hitting a 74-year-old cyclist with a club-like implement.

The incident took place in Peterborough, Ontario at around 11am on Tuesday morning, reports Global News.

According to an police, an eyewitness said that the driver and the cyclist started arguing as they both tried to make a left-hand turn.

The motorist got out of his pick-up truck and hit the cyclist a number of times with what police said was a “small club.”

The video was shot by the owner of a business across the street who pleaded with the driver to stop the attack.

One eyewitness said: “He was coming at him and coming at him hard. As soon as I saw him with that raised bat in his hand, I was like, ‘Oh my God, oh my God,”

After witnesses stepped in, the motorist, 65-year-old David Fox, drove off and was later traced by police to his home.

Police said he did not know the victim, who was treated at the scene by paramedics before being taken to hospital.

Fox has been charged with aggravated assault and assault with a weapon.

Peterborough Police spokeswoman Lauren Gilchrist said: “According to the criminal code a charge of aggravated assault would apply when a person is either maimed, wounded, disfigured or when the assault would involve endangering the life of that person.”

Fox is due to appear in court on 24 August.