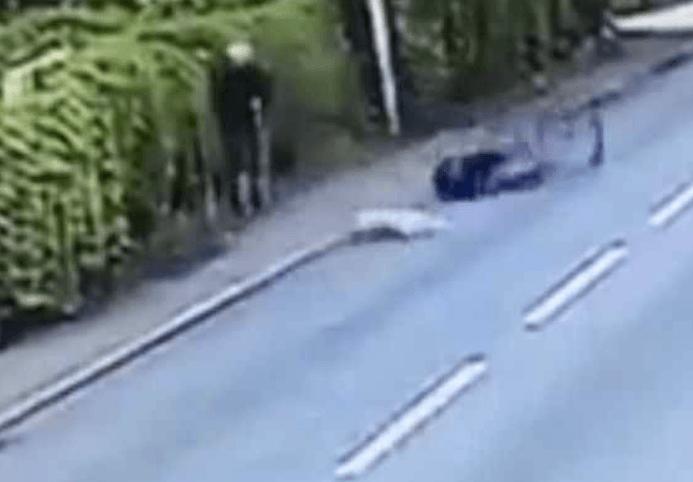 A cyclist who was filmed being taken out by an over-enthusiastic Labrador has warned owners of the dangers of out-of-control pets.

Christophe Moeri, 31, was thrown into the air when the dog jumped at his bike, and hit the ground before rolling several times.

He said the dog was aggressive towards him as he was helped to his feet, according to the Mirror.

Mr Moeri, a retail manager, was left with severe grazing and swelling after the incident on Tuesday.

He said: “I was going at about 23mph and the next minute this dog lunged for me aggressively and I went into the air and flipped over. My head hit the kerb but luckily my helmet took the brunt of it.

“I was dazed and I knew I’d hurt myself. The owner of the dog then tried to pick me up and take me to the side of the road. I got the sense that he was also in shock.

“Then someone else ran across shouting ‘Get that dog away from him, it’s attacking him’.”

Police were called to the scene but no further action is being taken.

Mr Moeri, who is a member of Liverpool Phoenix cycling club, says he may now take legal action, and may have to cancel a planned cycling holiday to the Alps.

He said: “The road is well known among the cycling community as a place where a lot of cyclists go because it’s a little bit of countryside close to the city.

“I’m desperate to get back out there on the bike as soon as I can but I’m just frustrated by it all."

In 2015 we reported how a man knocked off his bike by an out-of-control dog on a retractable lead won a £65,000 payout from the dog’s owner. Anthony Steele, 59, suffered a fractured skull when the dog leapt into his path while he was training for a Coast to Coast to event in Heysham in 2012.

Steele was riding with 10 other people when he noticed a group of people in the middle of the path and rang his bell to let them know he needed them to move aside.

However, as he passed by, a dog leapt in front of him and his bike became caught up with the retractable lead causing him to fall. Steele was off work for seven weeks and required neuro-psychotherapeutic therapy and cognitive rehab.