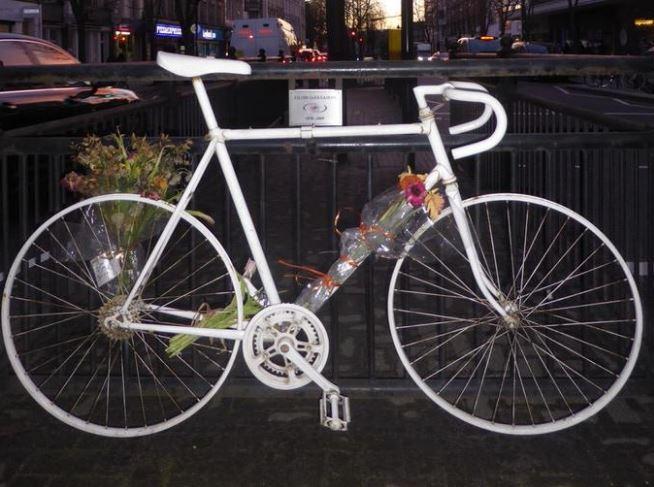 The White Bike is due to premiere in September but another £1,500 needs to be raised
by Simon_MacMichael

The team behind a play with a storyline inspired by the death of London cyclist Eilidh Cairns in 2009 needs to secure £1,500 more on Kickstarter so they can stage its premiere in September.

The play, called The White Bike, is written by Tamara von Werthern with its first full-length production, directed by Lily McLeish, due to be performed at The Space on the Isle of Dogs in London’s Docklands this autumn.

According to a synopsis on its Kickstarter page,

The White Bike is about a young woman who is killed as she cycles to work, leaving behind a husband and young daughter.

The story is told from a female perspective, with a strong female protagonist and exploring issues such as love, childbirth, motherhood and grief.

With 10 days remaining of the campaign, they have received pledges on Kickstarter totalling £1,998 towards a target of £3,500 – the sum they need to raise to provide match funding for an Arts Council England grant in the same amount.

“The production of the play will be of an exceptionally high quality and visually exciting - we need support to allow us to work intensively with our cast and creative team on incorporating light, movement and sound to the best effect,” says von Werthern.

Supporters of the project include RoadPeace, Sustrans, the Edinburgh Cycling Campaign, Pedlars, MiCycle, The Space, Queen Mary University of London, Nick Hern Books and Bath Spa University, and £10,806 has already been raised through support-in-kind and targeted fundraising.

Eilidh Cairns lost her life in 2009 when she was hit from behind by a lorry driven by Joao Lopes in Notting Hill as she rode to her work as a television producer. A ghost bike erected at the location where she was killed is the first permanent memorial of its type in London.

The play’s Kickstarter page says: “Her sister Kate Cairns has been supportive of the project from the beginning and has given her time and input first during the development of the piece and now by supporting the production through her campaign See Me Save Me.”

A previous Kickstarter campaign for the play achieved 210 per cent of its target, enabling it to be performed as a rehearsed reading at the Edinburgh Festival of Cycling in 2015 and to undertake research and development into “using movement and sound to create an immersive experience of the cycling for our audiences.”

A video trailer has also been produced, filmed by Tom Goudsmit and featuring Lois Jones, Jack Hughes and Marlene Werthern-Pilch.

The White Bike from Tom on Vimeo.