Video: Campaigners in Riga painted guerrilla bike lanes that were so good the city's mayor got complimented on them

That didn't stop city authorities in Latvian capital painting them over, mind...
by Simon_MacMichael

Activists in Latvia’s capital, Riga, painted guerrilla bike lanes that were so good that people apparently complimented the city’s mayor on them, believing they must have been an official initiative.

The lanes, shown in the above video – "vietas pietiek visiem" means "there's enough space for everyone" – were painted on the city’s main thoroughfare, Brīvības Iela, in the early hours of Friday 19 May.

According to a post on Skoda’s We Love Cycling website, campaigners have been urging city authorities for years to provide dedicated cycling infrastructure on the busy street, only to be told there wasn’t enough space – so they decided to take matters into their own hands.

While the city has devised a strategic cycling infrastructure plan, little of that has become reality particularly in the city centre, where levels of cycling are highest.

The cycle lanes installed on Brīvības Iela – which is due to be resurfaced this month – proved popular with bike riders, who started using them straight away, but less so with the city’s authorities, who wasted no time in having them painted over.

Designer Oto Ozols has shown how the street could be transformed to provide space for cycling, as shown in these before and after images. 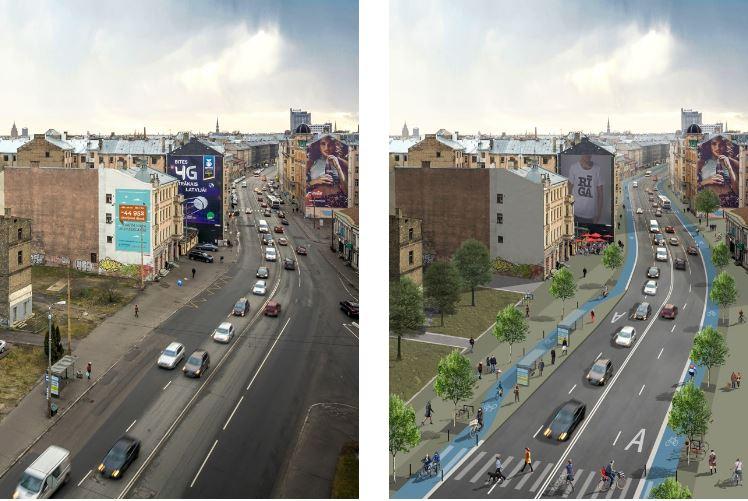 While Riga’s government may not have been impressed by the activists’ efforts, city authorities elsewhere have taken on board the message that campaigners are seeking to get across by making guerrilla infrastructure permanent – as has happened in Wichita, Kansas and San Francisco, among other places.