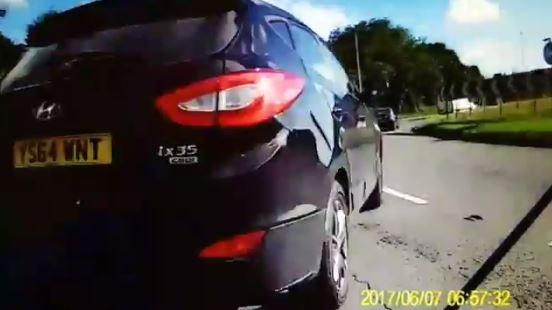 Police in Derbyshire have told a cyclist who was the victim of what the charity Cycling UK calls “one of the worse close pass videos” it has seen that they will not be investigating the incident – having apparently refused to even watch the footage at first.

Cyclist Luke Smith was riding through the Bowshaw Roundabout at Dronfield, just south of Sheffield, last Wednesday when a driver cut in front of him at speed, missing him by a matter of centimetres.

1. It was passed to @DerbysPolice who hadn't watched the video but said they wouldn't do anything pic.twitter.com/HN1qBCbXds

But he said that when he passed the footage to Derbyshire Constabulary, they declined to take action, despite not even having watched the footage.

He went on: “They said if I wanted something done I would have to find and contact witnesses even though there are 4 or 5 visible plates in the video.

He posted another video showing the driver of an articulated lorry pulling out on him on Monday at the same location.

This happened at the same roundabout this morning pic.twitter.com/rPxj8GJI3V

“They claimed they didn’t suffer from a high number of collisions from drivers ‘travelling too close’ to cyclists, something they suggested was a contributing factor in only two collisions in the previous four months.

“They appear to be working on the basis that if there’s no collision there’s no problem, and therefore no need to do anything.”

Speaking about Mr Smith’s experience, he continued: “The video of the vehicle overtaking Luke shows a close pass at speed, cutting across his path and putting him in obvious danger.

“If Derbyshire Police told Luke they wouldn’t be able to do anything because he hadn’t been hit there’s an obvious training need which needs to be addressed, because they’re wrong.

“If they initially refused to view the video there’s a police service issue to consider. If, having finally viewed the video, a sergeant concluded that the driver’s conduct did not even merit a discussion, let alone prosecution, that sergeant has no business dealing with any road traffic complaints or investigations.

“The failures in this case are that serious, and we will be writing to Derbyshire Police to point that out and to ask the Chief Constable this question: if that was a member of your family on a bike and they were passed in that manner, would you accept the explanation that there was no injury so no problem, and nothing to be done, because that’s the response Luke appears to have received.”

He added: “This is one of the worst close pass videos we have seen at Cycling UK, and the apparent explanation amongst the most inadequate and unacceptable.

“This video suggests that notwithstanding their previous assertions, Derbyshire Police do have a close pass problem, but unlike other forces they just haven’t recognised it yet.”