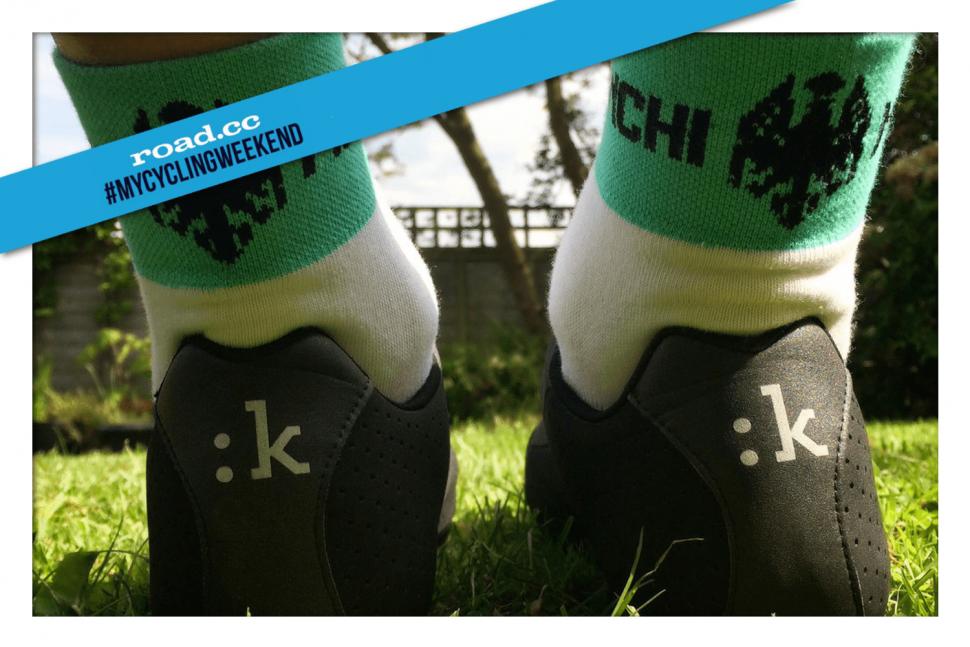 For many of you the weather this weekend wasn't at its summery best, but it didn't stop you getting out and showing off your footwear!...
by Elliot Johnston

It doesn't take much to put some cyclists off. Bad weather and tiredness are two of the most often carted out excuses, but they don't seem to affect many of you guys! If the photos you sent in this #mycyclingweekend are anything to go by.

While the summery weather we had last week seems some way off this week, it didn't stop you guys getting in the #mycyclingweekend spirit and sending in photos of your rides.

On Friday we asked you to send us shots of your socks. The prize for our favourite photo was a pair of our very own socks.

That photo came from an interesting angle, too. Specifically behind the feet of Christ Charlesworth, who goes by the moniker @Muddy250 on Twitter.

Mr Charlesworth and his fancy Bianchi socks have rolled away as this week's #mycyclingweekend winner. Congrats, Chris!

The sock shots didn't stop there. A very close runner up, and also a photo from a very similar angle, was tomaszeknieznany's.

A beautiful seafront and some fancy polkadot socks made our decision very difficult.

The most coordinated #mycyclingweekend entrant, however, was Simon Hesketh whose Scott socks and bicycle make quite the pair.

The old I only bought this bike to match my socks @roadcc #mycyclingweekend pic.twitter.com/EpHzKQUUmG

Meanwhile Clarebearr90 and Justin Berman were out rocking some stunning pink socks. We like your audacity guys, we're also partial to the occasional outing in pink!

Ignoring the glorious weather and keeping the legs fresh for #DragonTour with an easy spin and stretch in the gym.

Of course, #mycyclingweekends aren't all about what you're wearing. We also want to see where you're riding and who you're riding with.

Instagram user fra_tatta took this wonderfully summery shot of a hay bale and bike, while our very own News editor Simon MacMichael took his beautiful dog out for a spin.

When your #BFF is keen for you to start pedalling again after mid-ride stop #mycyclingweekend pic.twitter.com/np3FOkMn4L