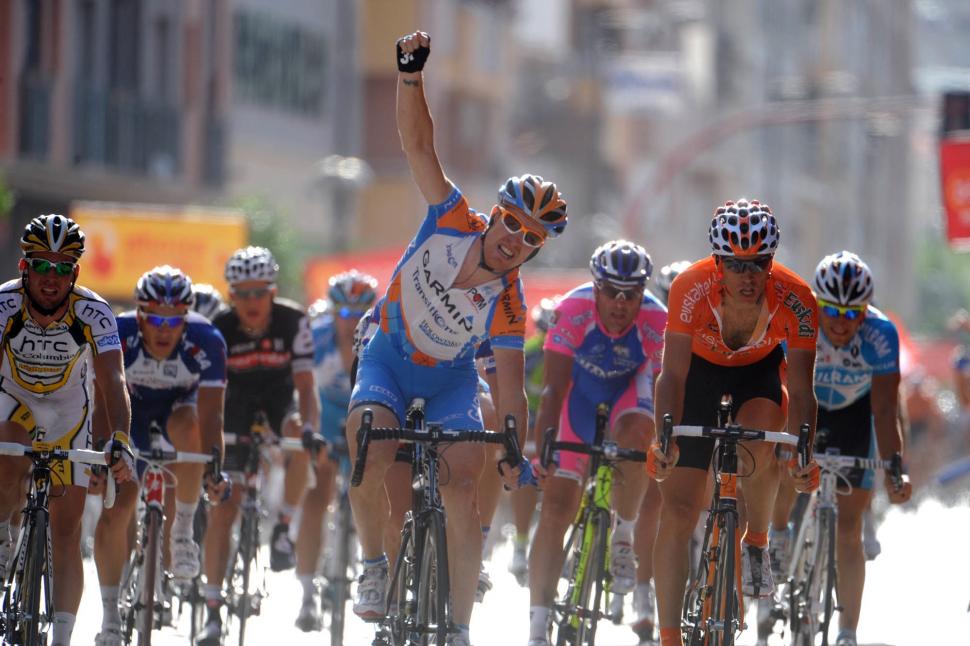 Vuelta Stage 5 reaction: Farrar uses Cavendish to lead him out

Garmin-Transitions Tyler Farrar has said that he was able to benefit from an unusually early bid for the line by HTC-Columbia’s Mark Cavendish in yesterday’s Stage 5 of the Vuelta a Espana in Lorca to use the Manxman as an unwitting leadout man before nipping out and passing him in the closing metres to take the win.

The American, forced to abandon July’s Tour de France after breaking his wrist in Stage 2 of the race, although he battled on until the pain eventually became too much on Stage 12, opened his account in this year’s Vuelta with his victory and said afterwards that the conditions had suited him, saying: “The wind made the sprint a little bit crazy. It was easy for riders to come from behind but I like this kind of very fast sprint.”

Farrar continued: “When Cavendish went on the right, I was able to take his wheel. Of course it’s always nice to win against the best sprinter in the world but it’s even better to win a stage at the Vuelta. I’m very happy.”

With HTC-Columbia already depleted through the absence of Berhard Eisel who abandoned the race earlier this week, Cavendish explained afterwards that he was forced to launch his attack when he did after misfortune struck one key member of his team in the closing kilometres of the run-in to Lorca. “My lead out man Matt Goss punctured with 5km to go,” he revealed, “so I had no choice but start sprinting from far. It was hard to hold it for so long.”

When asked if he knew that Farrar was on his wheel and about to pass him, Cavendish, who came third on the stage as he was also passed by Koldo Fernandez of Euskaltel-Euskadi replied: “I don’t have eyes at the back of my head.” 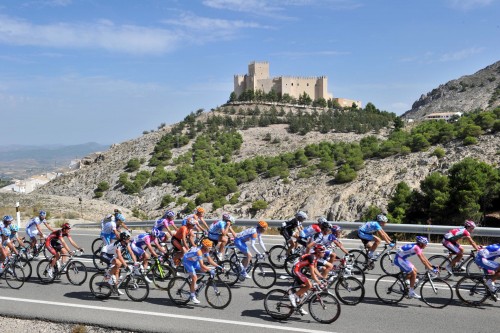 Like Cavendish, Farrar, who said after the stage that he had suffered a sleepless night through illness, with which he had also struggled on Tuesday’s Stage 4, found himself without a leadout man in the finale, explaining: “ With 20km to go I told my team-mates that I was up for the sprint. I didn’t have a real lead out man since Julian Dean is still injured. In the last ten kilometres, Matt Wilson did an absolutely fantastic work. When he took me where I had to be with 2km to go, it was just up to me after that.”

He added: “Winning always helps to build confidence. The world championship in Australia is a huge objective but there are still a lot of sprints to come at the Vuelta. I’m already happy with one win. Any other one coming after today’s would be a bonus.”

Meanwhile, TV commentators often respond to questions from viewers about why riders bother getting into breakaways if they know they’re going to be caught by saying that they’re making sure the team sponsor’s name gets in front of the cameras, or because they’re riding through their home region.

However, Arnaud Labbe of Cofidis, one of yesterday’s escapees (pictured below on the wheel of Pierre Rolland of Bbox Bouygues Telecom), revealed two other reasons – he was partly using the ride to help prepare for the cyclocross season, but “mostly to reassured myself after suffering from a sunstroke on day one.” 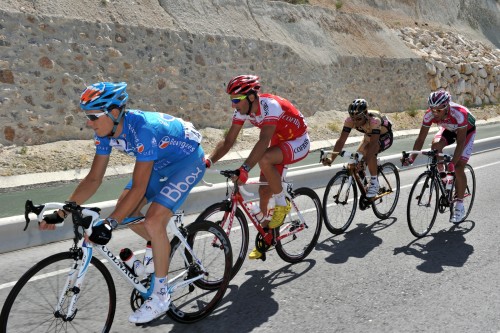 Today's Stage 6 starts in Caravaca de la Cruz, where Spain began their preparations for their successful campaign in this summer’s FIFA World Cup, and finishes in Murcia. On the way, it features the Category 3 Cresta del Gallo, a regular training run of local star Alejandro Valverde, crested just 10km from the team finish.

Valverde, last year's Vuelta winner, is missing of course this year as a result of the ban imposed after his ties to Operacion Puerto finally caught up with him, but does today's stage provide an opportunity for Caisse d'Epargne's riders to show that their team leader isn't forgotten? Or is such a notion simply bananas? 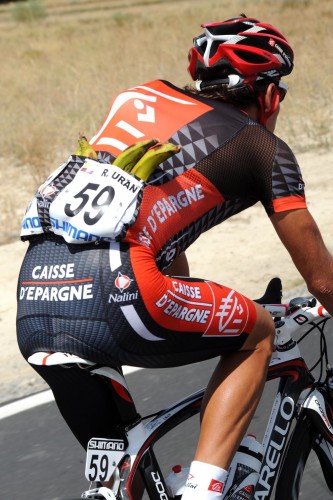