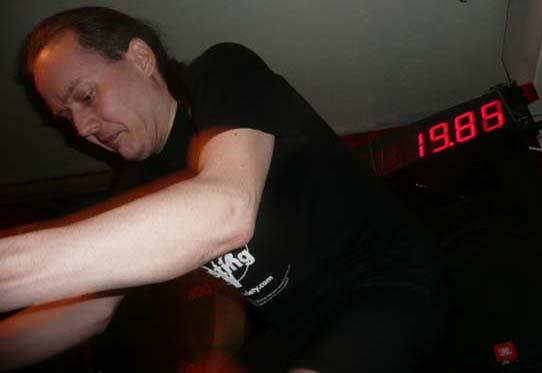 After months of secrecy the new Rollapaluza digital timing system was launched at the fourth round of the Rollapaluza Winter League on Wednesday night - something we broke the news about on Monday. Fittingly the new rig was rolled out at the site of the first every Rollapaluza at the Horse Shoe pub in Clerkenwell.

Rollapaluza have fitted the system to their "championship" rig, "Of the four rigs we operate the championship rig is the one that we take to all major events and competitions so as to maintain validity of record rides, all the top rides listed on our website were on this rig and we now believe it's the only traditional roller-race rig in the world with accurate digital timing" explains Paul Churchill of Rollapaluza.

The development process for the custom-designed system was lengthy " there were many variables and options to consider but we really wanted to keep the relationship between the starter and the rider which is so important to the Rollapaluza atmosphere" says Rollapaluza's Caspar Hughes. To this end the system has been designed so the starter / MC still gets to start the race and can still call false starts, but now the times taken at the end of the race are more accurate than any stopwatch could be. A coloured flashing beacon signals the winning rider and yes, the beacons are colour-coded to the rigs and the new stable of Rollapaluza-specific bikes supplied by Condor cycles that were also making their competition debut.

"It's really added to the event" continued Paul "spectators can now clearly see if someone is on for a good time and another bonus is that the digital clocks can be seen from 50 metres away, meaning the huge crowds we attract at events such as the Salford Nocturne, when Chris Hoy competed on our rigs, will be able to see all the action"

But just how accurate is the system? "we put in 20 hours of testing and calibration before we launched it" said Caspar who manages all the Rollapaluza equipment, "actually it was pretty much perfect the first time we plugged it in but the electrical engineer that designed it for us wanted to be absolutely sure and cover any race eventuality"

Rollapaluza will be using the digital timing system for all their championship and major events and the system will also be available as an optional extra to those who hire Rollapaluza for other events.