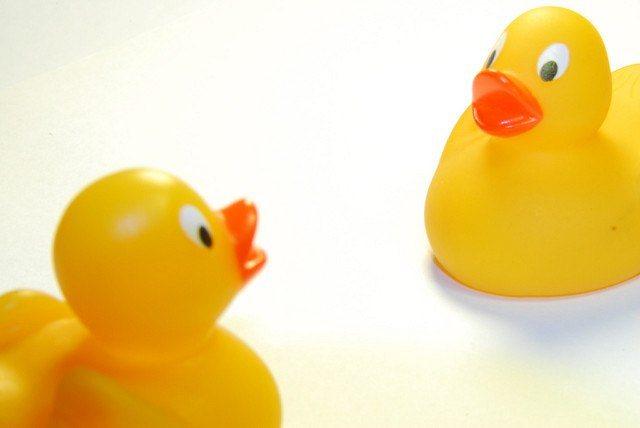 Villagers and parish councillors in an Oxfordshire village have staged a protest against their potholes - by filling them with rubber ducks.

Residents of Steeple Aston bought a farmyard full of the plastic toys and placed them into the holes when it rained to highlight their plight.

They say the authorities are "ducking the issue”.

Parish councillor Martin Lipson donated more than 100 ducks, which had previously been used in a charity event.

Councillor Helen Wright told the BBC: "We all met and we had bags and bags of bright yellow rubber ducks and luckily it was raining so the potholes were filling up perfectly for these ducks to have a little swim.

"It seems to have really struck a chord with people because everyone is getting fed up."

On the county council's website residents are told to report a hole the "depth of a coke can or the size of a dinner plate on a quiet carriageway" for repairing.

John Adriaanse, 73, said a milk run to the local shop ended in a fall when he "misjudged the depth of a pothole".

"My foot hit the puddle and I sprawled and fell quite heavily on my thigh," he said.

"I would have broken my femur if I was fairly unfit. I had a bruise on my leg for three or four days.

"[The ducks] made people laugh but they also realised the seriousness of the problem."

Oxfordshire County Council said: "While the issues raised don't represent a safety problem we do recognise that the road there is in a particularly poor state.

"When we have determined the most appropriate method of repair we will be in touch with the parish council to let them know what we will do and when.”

It’s not the only place with a pothole problem. Last month we reported how residents of a village in Nottinghamshire held a birthday, including a cake with candles, for a pothole that has gone unrepaired despite complaints being made about it to the local council for two years now.

Villagers in Plumtree have been asking Nottinghamshire County Council to fix the hole on Main Road, Plumtree, since at least March 2015.

They publicised the lack of action by the council by placing a cake next to the pothole and posting a picture to the @PlumtreePeople account on Twitter.

And in January, new analysis indicated the repair bill for potholes could reach £14bn within two years. To reverse the trend, the Local Government Association (LGA) is calling for the Government to inject a further £1bn a year into roads maintenance.

The LGA, which represents more than 370 councils in England and Wales, says such a figure would be more than three times councils' annual spending on highways and transport, which is currently £4.4bn.