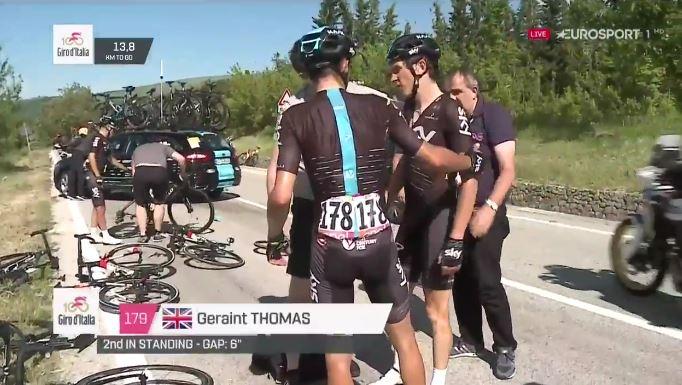 Team Sky rider has been having problems with his knee, and will now head for Tour de France
by Simon_MacMichael

Team Sky's Geraint Thomas has abandoned the Giro d’Italia due to the injuries he sustained in a crash during Sunday’s Stage 9 after a rider ahead of him crashed into aa police motorbike.

The incident saw the Welsh rider lose more than five minutes to his overall rivals and while he got some of that back on Tuesday's individual time trial, where he finished second, he lost more time on the subsequent two road stages.

> Video: "It shouldn't happen" - Geraint Thomas on crash that has wrecked his Giro d'Italia hopes

“I’ve been suffering since my crash on Sunday," he said. "I’ve had an issue with my shoulder which is manageable, but my knee has also been getting worse each day.

“Obviously it’s never nice to leave a race early, especially when it’s your main goal of the season, but I have to look at the bigger picture. I'd love to continue, but it would be a case of trying to survive each day rather than racing.

“I’ll turn my attention to the Tour de France now, and I want to arrive there with the same good form I started the Giro with.

“I want to thank all the staff and riders here," Thomas added.

"It’s been great fun and I wish them all the best for the remainder of the Giro. I’ve really enjoyed racing in Italy again. The fans have been amazing and I’ll be back.”

Team principal Sir Dave Brailsford said: “It’s desperately sad for Geraint. He has worked hard to arrive here in such great condition and we were looking forward to seeing him compete.

“As always, he has shown true fighting spirit and demonstrated what a competitor he is, but the impacts of a crash like that take their toll. We have to make sure that his injuries are managed optimally, ensure he is able to maintain his fitness and condition, and then look to set new targets.

“As far as the team goes, the GC has gone but there is still plenty to fight for and the opportunity is there for our riders to achieve a stage win in the 100th Giro,” he added.

Thomas's battling spirit in riding on for three stages despite his injuries drew praise from the race organisers in a message posted on Twitter this afternoon.