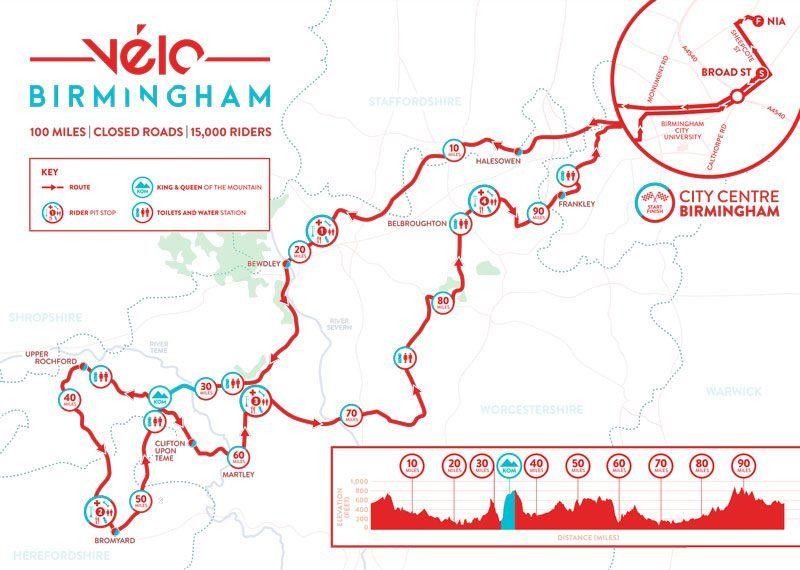 Organisers of September’s Vélo Birmingham have moved to allay concerns that the event, which is due to see 15,000 cyclists ride a 100-mile route on fully closed roads in the West Midlands and surrounding counties, may not go ahead after a council official suggested permission for road closures could be refused.

CSM Active, the organisers of the event, told road.cc that plans regarding road closures would be “finalised in the coming weeks” after it emerged that Jon Fraser, head of highways at Worcestershire County Council, outlined his concerns at a parish council meeting last month.

The meeting of Great Witley and Hillhampton Parish Counci, called to address concerns over “the lack of consultation from CSM Active about the event, took place on 24 April. A copy of the minutes can be found here.

Mr Fraser told the meeting that Birmingham City Council had approached Worcestershire County Council about the event some 18 months ago.

He said that while Worcestershire County Council was interested “in principal” in the event, it would need a full consultation, and that it assumed rolling road closures would operate.

But he went on to say that prior to any agreement being reached, CSM launched the event website and opened entries, with participants paying £75 to enter.

It was apparently only when leaflets publicising the route and road closures were subsequently delivered to areas affected that Worcestershire County Council learnt it would be held on closed roads.

That was described in the minutes as being “considerably unacceptable” to the council, with the claimed lack of consultation and concern over safety issues reportedly meaning it “will not grant the road closures if these are not met.”

The local authority, plus the county council of neighbouring Herefordshire, were said to be ready to refuse permission for road closures for the event as a result of their concerns, which include claims that local police forces have not been consulted.

Residents and businesses in Great Witley and Hillhampton are said to be concerned about the impact the event will have on them.

Similar concerns have been raised over other major mass participation events in the past, sometimes leading to some opponents taking matters into their own hands.

We have reported in the past on attempts to sabotage a number of sportives by people spreading tacks on the road, although it seems the overwhelming experience of riders on such events is that they are welcomed by the communities they ride through.

But regarding Vélo Birmingham, parish councillor Charles Shaw was reported in the minutes of the meeting as having said that “due to the anger within the local community disruptions, confrontations and the possibility of violence should not be ruled out.”

In an email sent to road.cc, CSM Active said: “We are aware of the concerns from businesses and residents based along the route and are working in partnership with local authorities to provide solutions for the community.

They added: “If businesses and residents have any questions or concerns about the road closures on the day, we encourage them to email route [at] velobirmingham.com and we will work closely with them to help resolve any potential issues.”