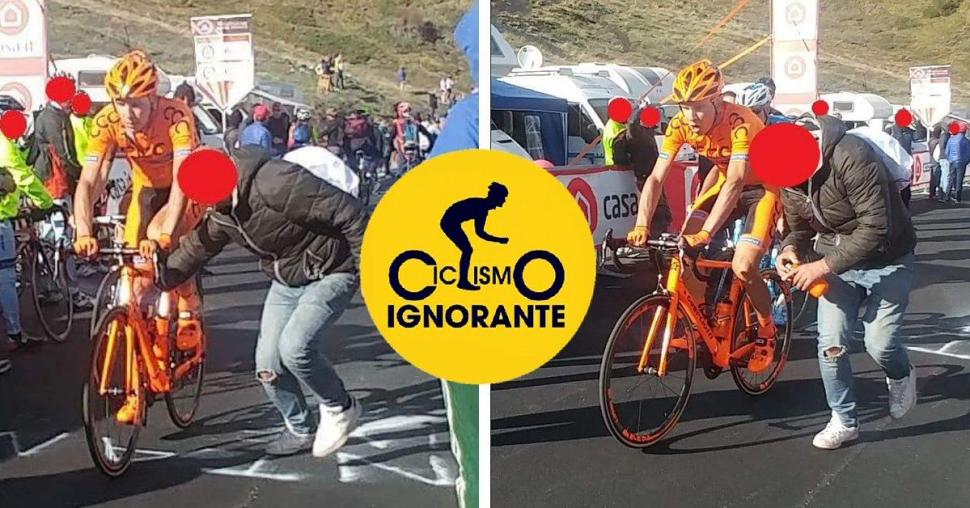 A brazen spectator at the Giro d’Italia has been snapped stealing a bidon from the bottle cage of a rider’s bike – as the cyclist was climbing Mount Etna.

The volcano provided the first summit finish of this year’s race on Tuesday’s Stage 4, with CCC Sprandi Polkewice rider Michal Schlegel the victim of the opportunistic theft.

Pictures of the incident, with the spectator’s face blanked out, were posted to Twitter by the Italian account Ciclismo Ignorante and prompted a couple of pro cyclists taking part in the race to chip in.

Referring to a curse widely used in southern Italy, UAE Team Emirates sprinter Sacha Modolo, who comes from the northeast of the country, said: “It’s normal. Do you know how many ‘chi ta muort’ or however the hell they say it I have been given in these parts because I didn’t give people my cap, helmet, jersey, shoes …”

Wilier Triestina-Selle Italia rider Giuseppe Fonzi, who was in yesterday’s break and is from Pescara in central Italy’s Abbruzzi region, said: “The bidon … if you give it to them, they don’t thank you, if you don’t give it to them, they tell you to eff off! If we have some, we give them out, but we don’t manage to give one to everyone!”

Schlegel himself has said nothing about the incident on Twitter.