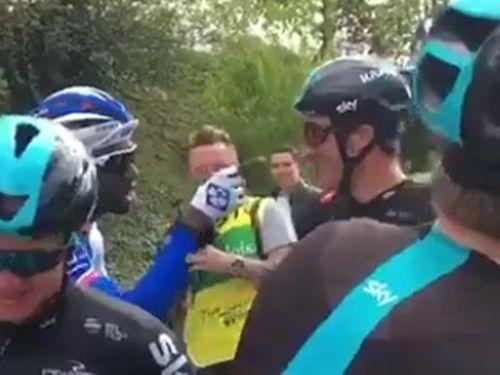 World cycling's governing body, the UCI, says it will investigate a complaint of racism against Team Sky rider Gianni Moscon following an incident at the Tour of Romandie on Friday.

The 23-year-old Italian is alleged to have made racist comments to FDJ's Kevin Reza following the end of Stage 3 of the Swiss race, won by Team Sky's Elia Viviani.

Reza can be seen remonstrating with Moscon in a video posted to Twitter by Team Sky showing its riders helping Viviani celebrate his victory.

Swiss rider Sebastien Reichenbach, a team mate of Reza's at FDJ, tweeted in response to that video that he was "Shocked to still hear imbeciles using racist insults in the pro peloton. You are a disgrace to our sport," he added.

While Reza accepted a subsequent apology from Moscon and FDJ said that it wished to bring the issue to a close in accordance with its rider's wishes, Cycling News said that the UCI had confirmed to it that the it would investigate the incident.

In an email, the governing body said: "The Union Cycliste Internationale (UCI) expects everyone in its sport to respect the highest standards of ethics and conduct. Racial abuse has no place in cycling or any other sport and any such complaint will be investigated and sanctioned if substantiated."

Moscon was due to attend a formal disciplinary hearing with Team Sky's senior management in Manchester today.

The UCI WorldTour outfit, which confirmed that Moscon had used racially abusive language, said in a statement ahead of the hearing: "This is an issue the team is taking extremely seriously. A formal disciplinary process began immediately."