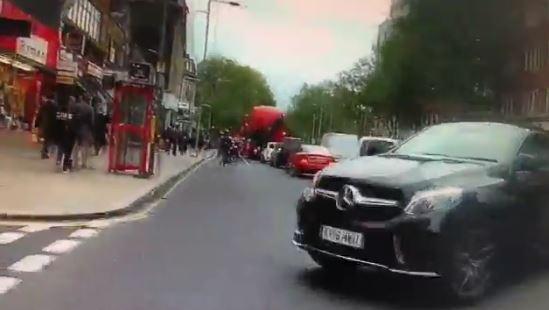 Crimewatch presenter and BBC Radio 2 DJ Jeremy Vine has posted footage to Twitter showing a driver who had just turned across his path as he rode his bike to “f*ck his mum.”

Vine often tweets incidents filmed on his commute, with a driver jailed earlier this month after his video evidence helped secure her conviction, triggering an existing suspended sentence.

The latest incident happened on Kensington High Street, with the driver of a Mercedes turning right into side street when Vine had right of way, causing the 51-year-old, who had just been waved through by a motorist in a parked Range Rover, to hit his brakes before carrying on round the front of the vehicle after it stopped.

You meet a better class of person in Kensington. pic.twitter.com/P4YjQAi1xQ

When Vine remonstrated with the motorist, the driver shouted at him, “F*ck your mum.”

The broadcaster observed in his tweet: “You meet a better class of person in Kensington.”

Some commenters to the post on Twitter suggested the motorist had done nothing wrong in executing the right turn, given that Vine had been filtering up the inside of a bus which had stopped to let the Mercedes turn right, though others pointed out that the cyclist had every right to carry straight on.

One cyclist familiar with the road said that they would have exercised more caution, but also criticised the Royal Borough of Kensington & Chelsea for its parking policies.

Another reply said both parties were equally to blame.

@theJeremyVine It's 50 50. The right turner started their manoeuvre before you were visible.

Finally, one Twitter user pondered what may have been behind the motorist’s specific choice of words.