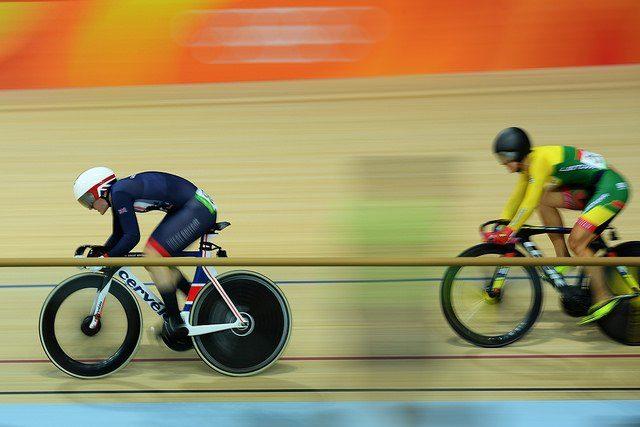 Last year, she joined Jess Varnish in criticising selection process after pair failed to qualify for team sprint at Rio
by Simon_MacMichael

Track sprinter Katy Marchant says that she has “never had a problem” with the culture at British Cycling, despite launching a scathing attack at the Great Britain Cycling Team’s coaching staff a year ago when she and Jess Varnish failed to qualify for the track sprint at the Rio Olympics.

In March last year, the pair came fifth in the event at the UCI Track Cycling World Championships in London to book a place in Brazil, but it was not enough to overhaul France in the qualification standings, costing the British riders a spot at the Games.

Speaking to the BBC immediately after that disappointment, Marchant insisted that chopping and changing the line-up during qualifying events to give less experienced riders a taste of top-level competition was to blame.

The 24-year-old from Leeds said at the time that she felt “a lot of frustration [and] disappointment,” and that she was “disappointed in the organisation."

She added: "We’re in this position through decisions of other people, not through any fault of our own."

Varnish was swiftly dropped from British Cycling’s world class performance programme, and the following month made the allegations of bullying and sexism against then technical director Shane Sutton that would help lead to the Australian’s departure.

Government funding agency UK Sport also ordered an independent review of the culture at the national team. The review panel’s report is now expected to be published next month, with the findings already causing sweeping changes to British Cycling’s top management.

Marchant did end up on the flight to Rio, taking bronze in the individual sprint – team mate Becky James clinched silver, and was also runner-up in the Keirin – and is heading to the UCI Track Cycling World Championships in Hong Kong this week.

She says that the comments she made 12 months ago in London were related solely to the team sprint qualification for Rio, and that the discrimination Varnish said she had been subjected to did not match her own experience.

“I had never had a problem with the culture,” Marchant said, reports Telegraph Sport. “Obviously at the World Champs last year there was a lot of disappointment, and there were some heated moments. Things got expressed maybe not the way that they should.

“But as soon as I got back to training after the World Championships, I changed my focus from the team sprint and took it on to the individual events. And I tend to be a very focused person so I don’t find it difficult to block things out and move on.”

After winning their medals in Rio, both Marchant and James said they would be prepared to speak to the independent review panel in Sutton’s defence.

However, she has now revealed that she did not give evidence because she believed she had “nothing to say” to the panel.

Callum Skinner, who won gold at Rio in the team sprint and silver in the individual event said that the atmosphere within the national team now had improved.

He said: “I think the important thing is that going forward – as Katy said – it feels now like we’re in a happy place and the sport is moving forward for the better.

“I would encourage anyone who continues to speak out …  to come down and see what the atmosphere is like now.

The 24-year-old Scot added: “I think it’s just good to draw a line under it, make the changes that are necessary and move forward.”