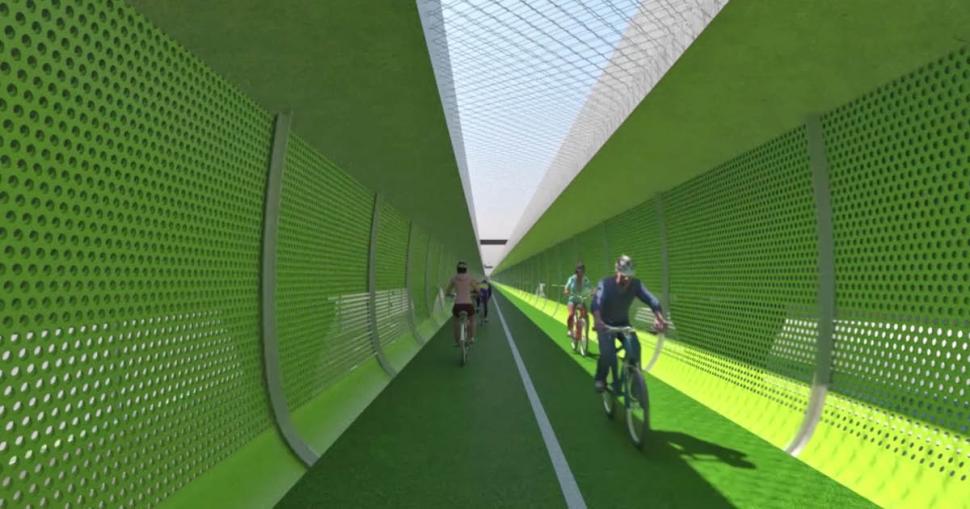 Cycle commuters in Melbourne are to get an elevated ‘Veloway’ to help speed them in and out of the Victorian capital’s central business district (CBD), with plans unveiled by the government of the Australian state.

The 2.5-kilometre route will be built above the city’s Footscray Road below a flyover for traffic that is also being planned by VicRoads, which manages the state’s highways, and will enable riders to bypass traffic lights.

It is being built as part of the West Gate Tunnel Project which in total includes 14 kilometres of cycling and walking paths, and will enable people riding into the CBD from Werribee to avoid motor vehicles for its entire length.

The planned infrastructure will also complete the Federation Trail cycle route which crosses the city, as well as the Kororoit Creek Trail, and the Labor government is also planning upgrades of existing off-road cycle paths.

As a whole, the project aims to give residents an alternative to using the existing West Gate Bridge and will also result in large commercial vehicles being banned from local roads in the area.

Minister for Roads, Luke Donnellan, said: “The West Gate Tunnel Project will take thousands of trucks off local streets and make cycling easier and safer for people to get around.

“The local community told us that they wanted to fix the gaps in the cycling network and that’s what we’re doing.”

The project has been conceived in part to meet forecast growth in the population of the west of the city, with construction due to begin in 2018.

Labor politician Wade Noonan, Member of the Victorian Legislative Assembly for Williamstown, said: “The number of cyclists is booming in the inner west and we’re giving them the infrastructure they need for continuous, safe and quick journeys into the city.”

He told Melbourne newspaper The Age: "It will be quick, direct and safe and will greatly improve the bike commuting experience for people in the western suburbs.

"The project adds bike lanes from Dynon Road into the west end of the city and it does away with the nasty crossing of the Moonee Ponds Creek at Footscray Road.

"The Western Distributor will also build the final section of the Federation Trail, as well as improving the route from Yarraville into Footscray, getting rid of dangerous intersections where bikes come into conflict with trucks."

Earlier this year, we reported on the world’s longest elevated cycle route covering 5 miles which has been built in the Chinese city of Xiamen.

> Longest elevated cycle path in the world opens in China

In 2013 architect Lord Foster and Network Rail unveiled proposals for a 135 mile network of cycle routes crossing London and running alongside elevated railway lines, but the city’s former mayor, Boris Johnson, dismissed the idea on grounds of cost.