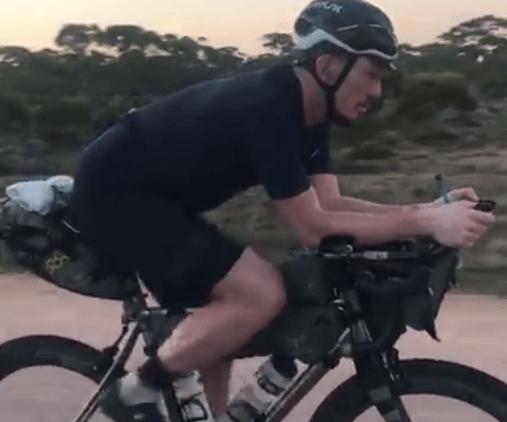 Both men are now in South Australia, leading the field having covered more than a third of the 5,300km distance
by Simon_MacMichael

Kristof Allegaert of Belgium is leading Great Britain’s Mike Hall in the Indian Pacific Wheel Race – nicknamed the IndiPac – but the Briton has been struggling first with numbness in his left leg and now with mental fatigue, meaning he is having to take longer stops than would be ideal.

The men, both among the world’s outstanding ultracyclists, are more than a third of the way through crossing Australia from east to west in the coast-to-coast event which began on Sunday.

But Hall, who by his own admission on Twitter has been struggling due to a variety of issues admitted on Twitter earlier today that mentally, he’s not quite in the race – despite still occupying second place.

4hrs minimum at Border Village, I was dangerous on the way to here. I don't know how much of it all was real #ipwr

— Mike Hall (@Normally_Human) March 21, 2017Hall has won the US events the Tour Divide twice and the TransAm Race, and won the inaugural World Cycle Race in 2014 in what would have been the fastest official circumnavigation of the globe by bike, had Guinness World Records not changed the rules.

He also founded the Transcontinental Race, which will be in its fifth edition this year, with three of the previous four editions including the inaugural event in 2013 won by Allegaert.

Currently, the Belgian has covered some 1,978 kilometres, while second-placed Hall’s distance stands at 1,907 kilometres as both head across South Australia towards Adelaide.

The route of the 5,300-kilometre coast-to-coast race from Fremantle in Western Australia to the Sydney Opera House in New South Wales, has been planned by organisers to showcase four very different kinds of terrain.

Allegaert and Hall have the desert section, including the vast Nullarbor Plain, behind them, and are currently in the rolling hills of South Australia’s wine country.

Still to come, once the head into Victoria, is the Great Ocean Road then the Australian Alps which forms the border between that state, the ACT, and New South Wales.

In all, 70 riders left the Western Australian coast to begin their unsupported journey across the continent, and all but six are still going.

You can follow their progress on the race’s website – if you haven’t tried keeping tabs on a long-distance bike race in that way before, we should warn you that the activity, known to practitioners as ‘dot watching’ can be strangely compelling.

Here are the Day 4 highlights.