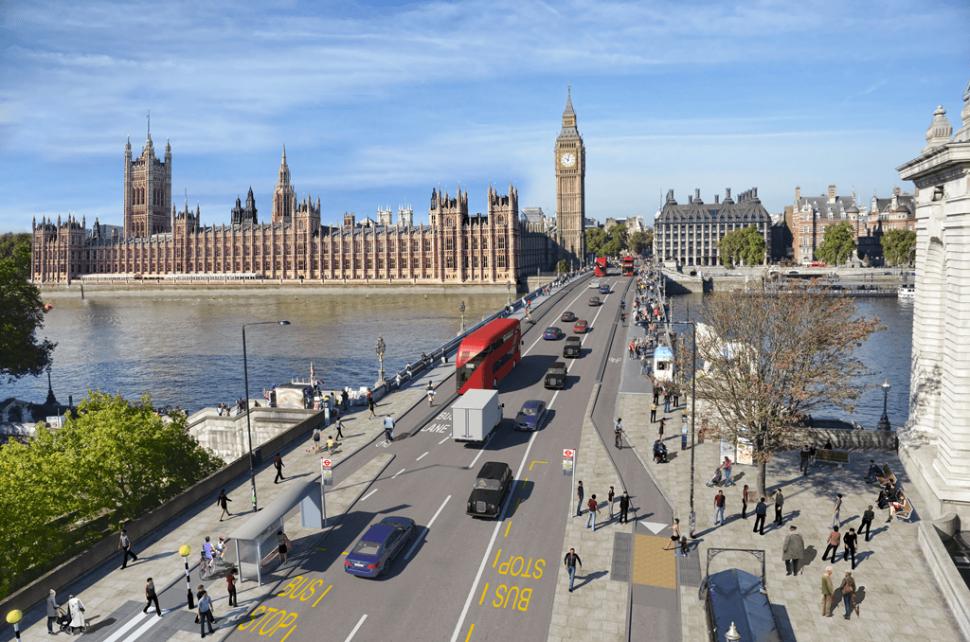 Transport for London and St Thomas appear to have come to a compromise over the bus stop bypasses, with the addition of zebra crossings on the cycle tracks to help allay hospital trust staff fears over patient safety, after which the Trust dropped its Judicial Review claim.

The route, which is expected to open early 2018, will include a 1.8m wide protected bike lane linking Waterloo Station with the East-West Cycle Superhighway, and includes the remodelling of the south-side junction of the bridge, with improved pedestrian crossings, new pavements, trees, bike parking and benches.

Work starts on 29 March and Transport for London says it will minimise disruption during construction. Campaigners, however, have raised concerns about delays to the scheme, which was given the green light a year ago following 74 per cent consultation approval.

Will Norman, London’s Walking and Cycling Commissioner, said: “It’s great news that work is about to start to transform walking and cycling facilities at Westminster Bridge. These improvements are going to make a real difference in the area, ensuring the iconic bridge is safer and more pleasant to use.”

“We’ve also been looking carefully at the disruption caused by the construction of previous schemes and I can ensure all road users that we will be working hard to ensure that this is kept to an absolute minimum.”

Transport for London (TfL) says disruption will be mitigated with longer working hours, and the use of new technology allowing integration of temporary traffic signals to the central command, which can react to traffic flows 24 hours a day.

In a concession to St Thomas’ Hospital Trust, who said they had “serious concerns” of the potential risks to patients, three bus stop bypasses on Westminster Bridge will now feature zebra crossings, with the pedestrian crossing width doubled at these locations to six metres to reflect the 'special features of their location outside a busy hospital'. 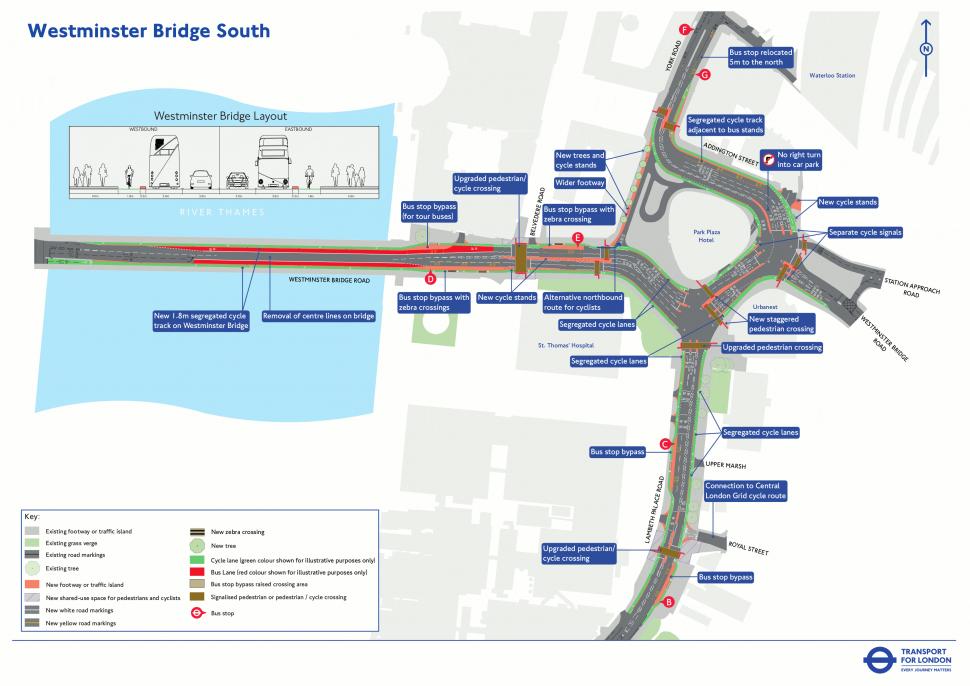 Although cycle campaigners welcome the news, there remain concerns over delays: the scheme was given the green light by former London mayor, Boris Johnson, in March 2016 after receiving 74 per cent support in a consultation, and construction work was originally scheduled for Autumn 2016.

Simon Munk, the London Cycling Campaign’s Infrastructure Campaigner, told road.cc: “We welcome the news this scheme is finally moving forward. Obviously we’re concerned about the length of time it took for this scheme to be approved for construction and the proposed length of construction – it’ll mean Will Norman and the rest of the Mayoral team will need to get a shift on with other schemes, to fulfil the Mayor’s Sign for Cycling pledges to the London Cycling Campaign.

“We’re also pleased the trust has rescinded its threat of legal action. The evidence coming out of TfL is ‘bus stop bypasses’ don’t cause big conflicts between pedestrians, bus users and people cycling. We’re waiting on the results of TfL’s trials on design of these, but putting a raised table and zebra crossing across them seems a fairly sensible way to indicate that cyclists should give way to pedestrians at these, particularly in locations like this – directly outside of a hospital.”

Westminster Bridge will become the fourth bridge in Central London to feature protected cycle lanes, and protected routes will continue onto roads connecting to the south-side junction, where new separate cycle signals will be introduced.

Leon Daniels, Managing Director of Surface Transport at TfL, said the plans will open up the Waterloo area for pedestrians, while linking with London’s growing cycling network.

He said: “We have planned the work to minimise disruption, but there will be some impact. We thank road users for bearing with us while work takes place and are asking them to plan and leave more time for journeys in the area, and if possible, use alternative routes.”

The plans are part of Sadiq Khan’s strategy to tackle congestion in London, and encourage more people to walk, cycle and use public transport for everyday journeys.