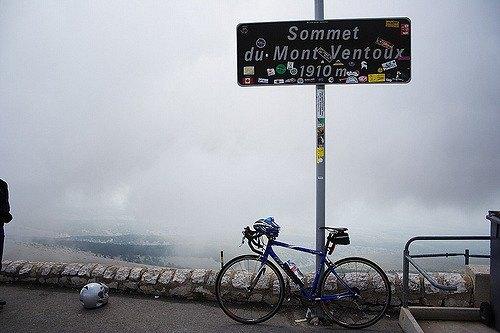 Local mayor isn't so sure it was the work of thieves - he's pointed the finger at the departmental council...
by Simon_MacMichael

A sign marking the summit of Mont Ventoux has reportedly been stolen – although a cyclist who has ridden up the mountain nicknamed the Giant of Provence is not so sure that a thief made off with it, a view shared by the local mayor.

The sign provides a backdrop for photographs of cyclists and walkers who have conquered the ascent and is plastered in stickers left there by those who have climbed the mountain.

French trail running champion Sandra Martin noticed the sign had gone and told France Bleu that it was “outrageous and sacrilegious” that it had been stolen.

She blamed the disappearance of the sign on a “Ventoux fetishist” who would have taken the sign “to put it up in their living room or above their bed.”

But Lionel Tartelin, a local cyclist nicknamed Ventouman who has ridden up the mountain more than 400 times, told the Dauphiné Libéré it would have been difficult for a thief to take the sign away, given that he believes the sign was removed in January.

“When I climbed the Ventoux on 25 January, the sign was no longer there. It’s like cutting down a tree or flowers – it damages our beautiful Ventoux.”

However, he added: “The road is closed [during the winter] and I have trouble picturing someone coming down the mountain with a huge sign under their arm."

Luc Reynard, mayor of Bedoin, the village at the foot of the climb suspected that workers from the Vaucluse department may be responsible.

“I don’t really know what to make of it,” he said, “but surely it has to be them. A fortnight ago, I was at a meeting with the head of the departmental estate management section. Their services must have removed the sign to replace it with a new one that had the true altitude measured in June by the Vaucluse surveyors’ society.

That height will reportedly be shown as 1,897 metres rather than the 1,911 on the sign that has vanished – the difference being that the former is the highest altitude that the road reaches, while the latter is the summit itself.

Searching online for an image of the sign suggests that it is regularly replaced, and that the official altitude of the summit keeps being revised.

One previous version of the sign, pictured above, gives the summit’s height as 1,910 metres another one, in this photo from 2012, shows it as 1,912 metres.