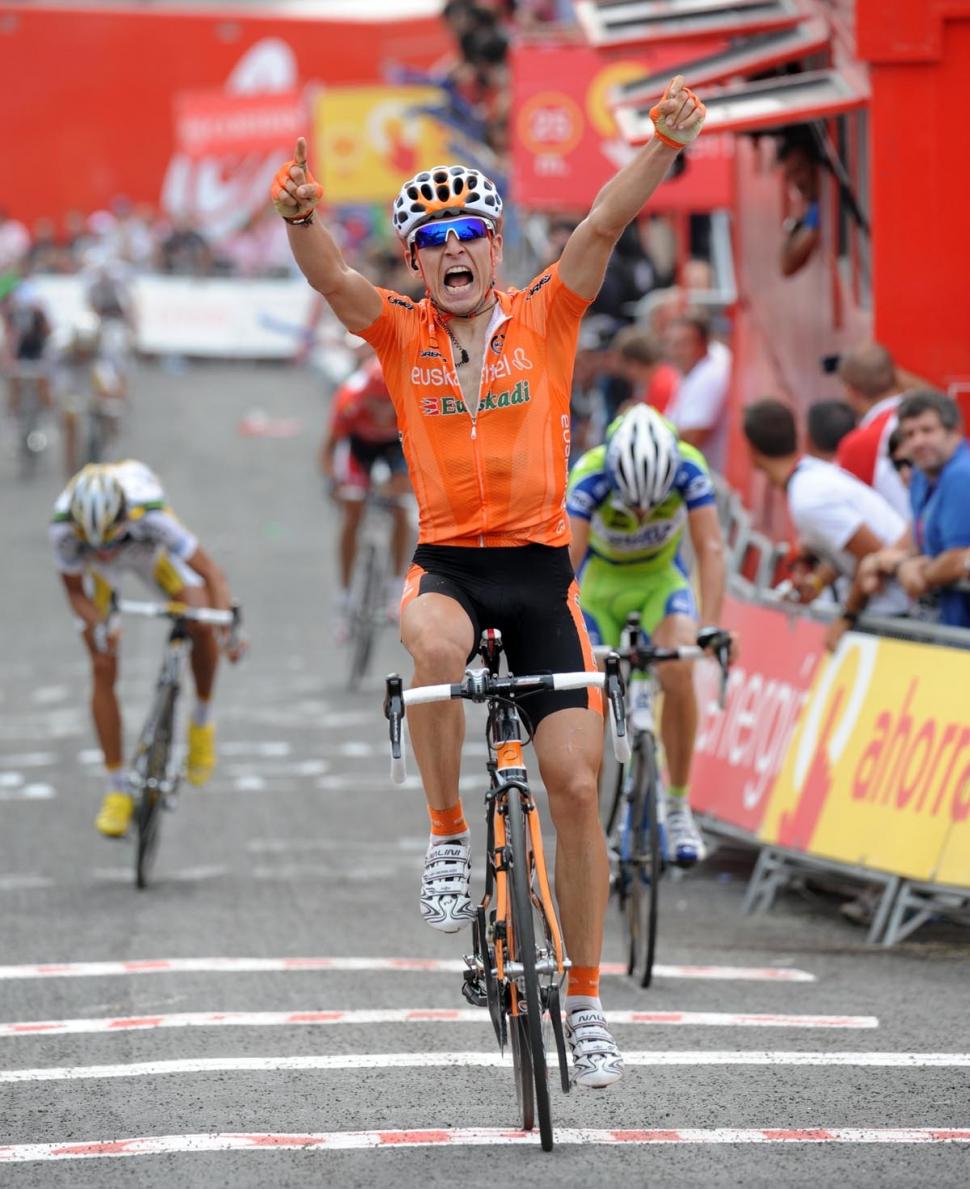 Gilbert happy to keep red, Nibali on form, and Team Sky struggle through illness
by Simon_MacMichael

Igor Anton of Euskaltel-Euskadi, winner of yesterday’s Stage 4 of the Vuelta a Espana, has played down suggestions that in the absence of his team mate Samuel Sanchez and Astana’s Alberto Contador – not to mention last year’s winner, the suspended Alejandro Valverde – he represents the best prospect of a home victory in this year’s race, pointing instead to Katusha’s Joaquim Rodriguez.

However, the 27-year-old revealed that he owed his win in Valdepeñas de Jaén, which came after he launched an attack on the day’s final, sharp ascent to the finish, to scoping out the route last month and lessons he had drawn from April’s Flèche Wallonne, where he finished fourth behind BMC Racing’s Cadel Evans.

“I did well to come here a month and a half month ago to reconnoitre the end of today’s stage,” explained the Basque rider. “I absolutely had to stay calm in the descent of the Alto de Valdepeñas even though I was worried by the attacks of Vincenzo Nibali and Luis Leon Sanchez. Fortunately they were brought back and my team-mate Mikel Nieve did a fantastic job for me to stay in the best position before the finishing ‘wall’.”

Anton continued: “I remembered the finale of the Flèche Wallonne where I made the mistake to attack too early in April this year. It was a useful defeat. I’ve learned what not to do in these circumstances. I didn’t panic when I saw Uran and then Rodriguez attacking. I’ve calculated my efforts pretty well although I was afraid of Nibali passing me at the very end.”

Turning to his chances of the overall victory – Anton now lies second overall, ten seconds down on race leader Philippe Gilbert and on the same time as Rodriguez, Anton said: “My goal for the Vuelta was to win a stage. Rodriguez is very strong and I think he’s the favourite for the overall victory. As for myself, I have the condition for doing something good but I haven’t won any small stage races yet. I must improve gradually.”

Gilbert, meanwhile, revealed that he had dug in deep to hang on to the leading rider's red jersey, finishing in fifth place five seconds down on Anton to retain the overall lead on a day when his team had set the pace at the front of the peloton to keep in check an escape group comprising the AG2R-La Mondiale rider Guillaume Bonnafond, Quick Step’s Dario Cataldo (both pictured), Dominik Roels of Milram and Andalucia-Cajasur’s Sergio Garcia. “During the whole stage my team controlled the four breakaway riders,” Gilbert explained. “They weren’t dangerous for GC so it was good for us. I was well positioned before the final climb but Katusha set the pace really high. Many riders lost contact. I hung on but I’ve suffered a lot.”

The Belgian continued: “When I passed the Alto de Valdepeñas” – the day’s main climb, its summit crested 7km from the finish – “with my main adversaries, I thought I could keep the jersey. There was nothing to do against Anton. In such a climb, everyone ends up where he should be!”

Like Anton, Gilbert drew comparisons between yesterday’s finale, where the gradient hit 23% inside the final kilometre, and that of the Spring Classic held in his native country, claiming, “the Mur de Huy at the Flèche Wallonne is harder than this one.”

The 28-year-old, who took the race lead from Mark Cavendish after winning Monday’s Stage 3 in Malaga, added: “It’s a great motivating factor for the whole team to defend this jersey. I have some chances to keep it till the end of stage 8 I guess but rain is expected tomorrow and as much as I enjoy being the leader of the Vuelta, I won’t take any crazy risks if it’s dangerous.” Rodriguez, however, was left to rue a missed opportunity to take the race lead, which would have been his by virtue of the 20-second time bonus that would have come his way had he won the stage.

“I felt good today and my team did a great job setting me up,” he reflected. “I was hoping to win and take the red jersey but I was so much in the media as the favourite for today that people were marking my wheel. In the final hill I just didn’t have the right moment to attack for the win.”

Vincenzo Nibali of Liquigas-Doimo, a surprise third overall in this year’s Giro d’Italia behind team-mate Ivan Basso – he’d been holidaying with family in his native Sicily when the eleventh-hour call-up came after the late exclusion of France Pelizotti for suspicious blood values – gave a strong indication that he has his sights set on a podium finish in the Vuelta.

After finishing second to Anton – had he timed his attack earlier, there’s every possibility he could have caught the Spaniard – Nibali immediately asked how much time bonus he had gained. The answer, 12 seconds, is enough to put him fourth in the GC, 2 seconds behind both Anton and Rodriguez.

Unlike Gilbert, Nibali expressed healthy respect for the final approach to the line, exclaiming, “Man, this was a hard climb!” He added: “I thought Rodriguez would be the one to go when Anton attacked. He escaped from my attention. Otherwise I’m happy with my condition and with the great work of my team. We’re on the right track for having a good Vuelta.”

It was a disappointing day, however, for Carlos Sastre of Cervélo TestTeam, dropped on the way up the Alto de Valdepeñas, pushing him down to 22nd on the GC, more than two minutes behind the leaders.

“My feelings aren’t the best at the moment but my hope of doing well during these three weeks remains the same. Right now some people are fresher than me,” said the Spaniard, who moves to Geox, the renamed Footon Servetto team, at the end of the season. 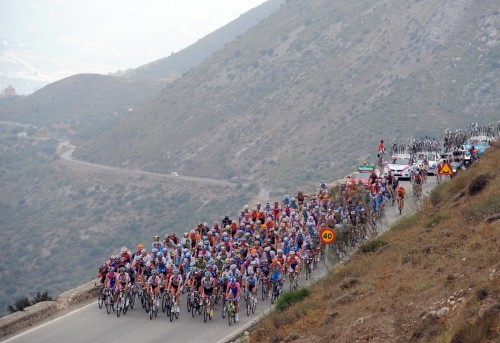 Meanwhile, the seven remaining members of Team Sky’s squad endured a very tough day in the saddle as they struggled with the mystery virus that forced both Ben Swift and John-Lee Augustyn to abandon the race on Monday’s Stage 3.

Simon Gerrans, who on Monday evening had revealed on Twitter, “I just had possibly the worst day on the bike in my life,” again went online yesterday evening to say: "I thought I was right this morning, but damn was I wrong. I just spent another day spewing in Spain."

Team Principal Dave Brailsford told the Team Sky website that Gerrans wasn’t the only rider struggling. “Thomas [Löfkvist] and Kjell [Carlström] went down with it today,” he explained. “Kjell in particular had a torrid day, riding the last 5km on his own to somehow finish the stage.”

Brailsford continued: "Pretty much everyone has had it now - Lars-Petter [Nordhaug] finished relatively high up today but even he's not 100% and was complaining about his stomach this morning.”

He added: "It's so hard to try and deal with the race and expect your body to recover from the illness - it really is a major battle to survive in the race. I can't convey enough just how much the guys are suffering and that them staying in the race is a feat itself."

Today’s Stage 5 takes the race 198.8 kilometres from Guadix to Lorca and may well result in a sprint finish, although if HTC-Columbia’s Mark Cavendish has his eyes on victory, he’ll have to achieve it without team mate Bernhard Eisel, who abandoned yesterday.