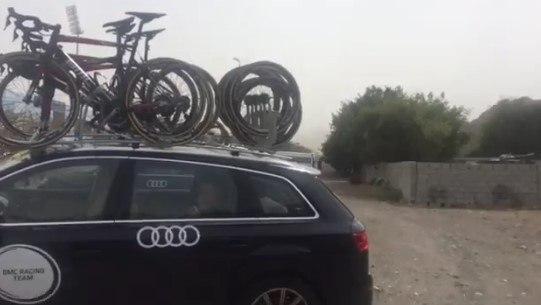 Race organisers have applied the UCI’s extreme weather protocol and cancelled stage four of the Dubai Tour due to strong winds. The queen stage featured the only significant climb of the race and its omission means race leader Marcel Kittel is a significant step closer to overall victory.

The wind had been building during stage three, after which Kittel had pointedly observed that, “the organisers of the Dubai Tour are very well known for taking the right decisions when it comes to extreme weather.”

The stage four route was duly adjusted, but following discussions between riders and commissaires, it was cancelled entirely.

#DubaiTour stage 4 has been cancelled due to extreme winds. pic.twitter.com/LJRxyuMLML

A statement from RCS said: “Based on the poor current weather conditions in Hatta, and the forecast for further deterioration later, the Race Management, in agreement with the Commissaires Panel, have applied the UCI's Extreme Weather Protocol and have cancelled today’s Stage 4 of the Dubai Tour.”

Footage from golf's Dubai Desert Classic gives some idea how bad the winds have been.

The Herald Sun’s Sophie Smith reported that riders had suggested changing the stage from a road race to a time trial up Hatta Dam, but this was said to be against UCI regulations.

Matt Winston, head sports director at One Pro Cycling said the decision was appreciated by the riders.

We speak to Head DS @Mattw1nston following the decision to cancel today's Hatta Dam Stage at the @DubaiTour due to dangerously high winds. pic.twitter.com/V1JqsOA2Uz

Yesterday, Andrei Grivko was ejected from the race for punching Kittel and the Astana rider claimed that tensions resulting from tough weather conditions had played a part.

Writing on Facebook, he said that while fighting for position early on, Kittel had first pushed both himself and team-mate Dmitriy Gruzdev.

Grivko also accused Kittel of spitting at him and said: "Perhaps, I got emotional and it has nothing to do with cycling, but in extreme situations, when exists a question of safety, it is difficult to stay calm.

“I believe that such behaviour, endangering the lives and health of athletes, because of their selfishness, has nothing to do with cycling as well. In peloton we are all equal and have equal rights to positions occupied by us, it doesn’t matter if you are a famous sprinter or neo-pro. We should equally respect each other.”