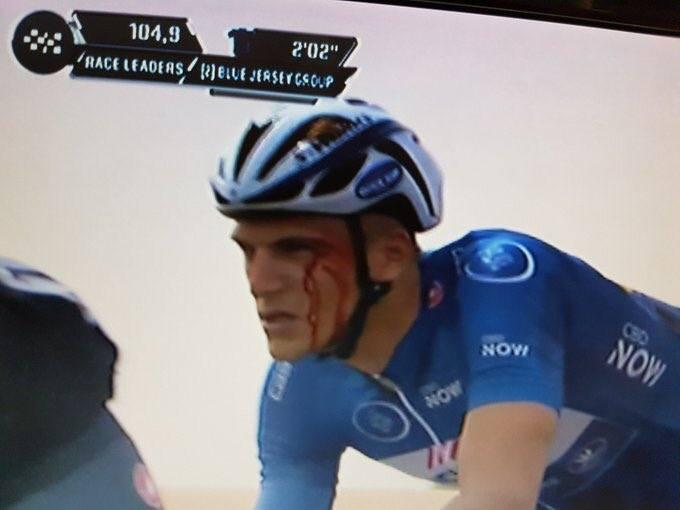 Videos: Marcel Kittel bloodied after Astana rider elbows him at Dubai Tour as sandstorms cause havoc

German left with blood streaming down his face after incident during today's Stage 3...
by Simon_MacMichael

Race leader Marcel Kittel was left with blood streaming down his face at the Dubai Tour today, claiming afterwards that he had been struck by Astana's Andriy Grivko - who has since been thrown off the race. Meanwhile, riders had to contend with crosswinds and a sandstorm during today's 200km Stage 3, won by Trek-Segafredo's John Degenkolb.

News that Kittel had been attacked by an Astana rider was initially made on Twitter by his Quick Step Floors  manager, Patrick Lefevere.

@marcelkittel has been beaten by an @AstanaTeam rider. I hope that the president of the jury takes his responsibility #dubaitour2017

It was subsequently confirmed by Kittel, who said after the race:  “I got punched by Andriy Grivko from Astana. That's why I had blood on my face but I didn't crash. There was some confusion in the race. My team worked well for the sprint but I was not in a perfect position and maybe my head was elsewhere too.”

In the video below, Kittel seems to be explaining what had happened to Dimension Data rider Jay Robert Thomson, gesticulating with his elbow and shaking his head.

A number of teams posted footage of the sand blowing across the road, making conditions very unpleasant - not to mention dangerous - for the peloton.

Crosswinds had caused the peloton to split into three echelons but, as the sandstorm intensified, the bunch reformed.

Here's some of the videos of the day.

Video footage of the difficult weather conditions facing the peloton on Stage 3 of the #DubaiTour. pic.twitter.com/wuxfMtwpfC

#DubaiTour Here's a taste of the strong winds that have caused the echelons. pic.twitter.com/TOtTqv5ppB