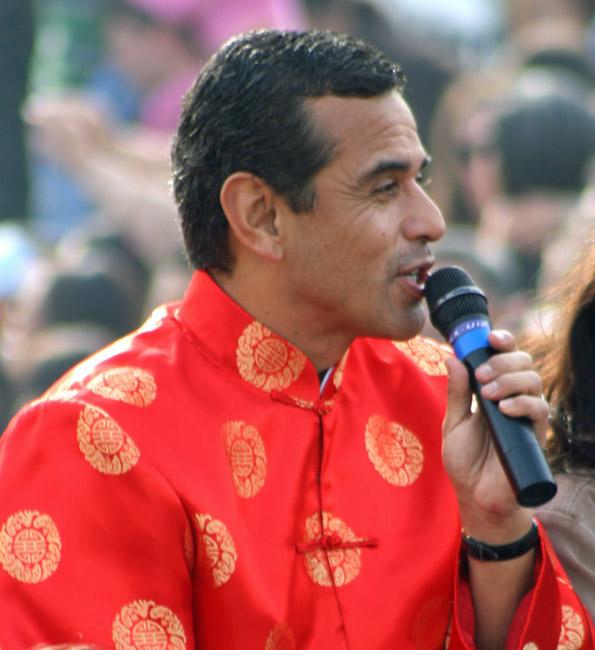 Los Angeles Mayor Antonio Villaraigosa has become a cyclists’ champion following an accident in which he broke his elbow.

Following his accident - which happened on his first ride after taking office - Mayor Villaragosa has been campaigning to make streets safer for cyclists.

The 17 July accident happened when a parked cab abruptly pulled out across a bike lane. Since then, Villaraigosa has said it's time to recognize that bicycles have their place on the streets of LA, a notoriously car-focused city.

The Mayor convened a cycling summit last week, which he used to announce that he was going to do what he can to change LA’s car culture and accelerate various cycling-related projects, including building 40 miles of cycle path each year for the coming five years.

The city is updating its bicycle plan, which includes 1,633 miles of bike lanes, paths and routes.

Villaraigosa says the city needs to invest in bicycling infrastructure and focus on traffic safety enforcement to make streets safer for cyclists.

"We also have to have a cultural paradigm shift," Villaraigosa said in an interview with The Associated Press. "We have to recognize that even in the car capital of America, drivers have to share the road."

About $3.2 million will be set aside for bicycle and pedestrian improvements in the 2011 financial year, he said.

There are other signs that attitudes seem to be changing in the city. Los Angeles Police Department has begun cracking down on motorists who don't respect cyclists' rights.

Recently, the department changed policy by assigning traffic officers instead of beat officers to investigate clashes between bikes and cars. Cyclists had complained that police refused to take reports if no collisions occurred, even when a motorist made a careless manoeuvre that caused a cyclist to fall.

The Mayor’s conversion has surprised many local cyclists, some of whom still haven’t got over the shock that he was even on a bike in the first place. Ted Rogers (no, not that one), author of the BikingInLA blog, said, "You could have knocked over any cyclist with a feather when we heard that."

So is this the day that the Los Angeles finally turned the corner to become the bike-friendly city it always should have been?

Don’t get me wrong. This was huge, and hugely successful.

But there’s still a lot of work to do. And Mayor Villaraigosa still needs to demonstrate that his support goes beyond mere words and meetings, and will lead to the genuine action and hard choices that will make a difference on our streets and for our safety.

But it’s a start.

After five years in office, the Mayor is finally talking to us.

More importantly, he actually seems to be listening.

1
Police officer caught on camera telling cyclists to ride in single file to be given "education around traffic offences"
2
"Check the Highway Code": Police officer claims cyclist shouldn't ride "in the middle of the road"
3
Driver "used bus as a weapon" against cyclist, loses appeal over sacking
4
“Everyday tasks have become my new challenge”: Christina Mackenzie in “excruciating pain” after being struck by hit-and-run motorist
5
Hit-and-run driver moved unconscious cyclist off road before fleeing scene
6
Cyclists report multiple muggings and thefts on London cycle route
7
Canyon revamps Inflite cyclocross range for 2023
8
Near Miss of the Day 827: Two close passes and a screenwash shower