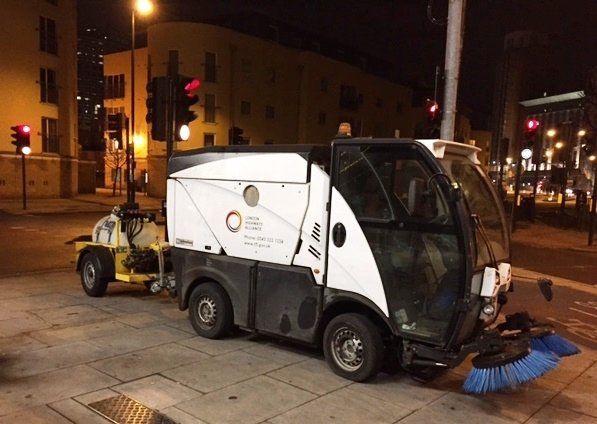 Gritting of London Cycle Superhighways - a case of hit or miss?

TfL prepares Red Routes for winter weather, but much of CS1 missing from Hackney's gritter lorry route...
by Simon_MacMichael

The forecast “thundersnow” may have given London a miss – a light dusting of the white stuff yesterday afternoon was pretty much it, to the disappointment of many.

But preparations for the expected snow and ice did highlight one thing of relevance to the city’s cyclists – whether the infrastructure they use gets gritted or not.

Most run alongside major arteries – the “red routes” that make up the Transport for London Road Network, and which are maintained by TfL rather than London boroughs.

TfL, together with the emergency services and London Councils, draw up to minimise the impact of severe weather – including on “key arterial roads, cycle routes and footways around bus and railway stations, hospitals and police, fire and ambulance stations.”

As part of that, there is a commitment by TfL and the boroughs “to ensure that the Cycle Superhighways and other cycling routes remain safe to use during the winter months.”

Some 39 gritters are used by TfL on the 580-kilometre red route network, and quad bikes and flatbed lorries are also used – plus, as shown in this tweet, a small road sweeping vehicle being used to keep a cycle route ice-free.

We’re working hard to keep your Cycle Superhighways safe and clear during wintry weather – look out for us on your route pic.twitter.com/Ua1H5Dl90P

Away from the Red Routes, though, the responsibility for the other 95 per cent of London’s roads lies with the individual boroughs.

One cycling blogger highlighted on Twitter how that means that most of Cycle Superhighway 1 in Hackney, which passes mainly along quieter roads parallel to the A10 - and which is therefore maintained by the council -  won’t be treated, according to the borough’s gritting map.

Map on this page shows that most of CS1 will not be gritted by @hackneycouncil https://t.co/vUBGCbRgCd

Elsewhere in the city, a section of one of the older Cycle Superhighways that still have their original blue paint had to be gritted in recent days as a temporary measure after cyclists slipped on its surface, which had become greasy.

Contractors working from TfL were due to have carried out work to remedy the problem on Wednesday night.

A Twitter user from the Netherlands drew TfL’s attention to the way one city there, Ede, has looked at tackling the problem of snow and ice – it’s installed a heated cycle track.

> Cycling survival: road.cc's tips for riding on ice and snow