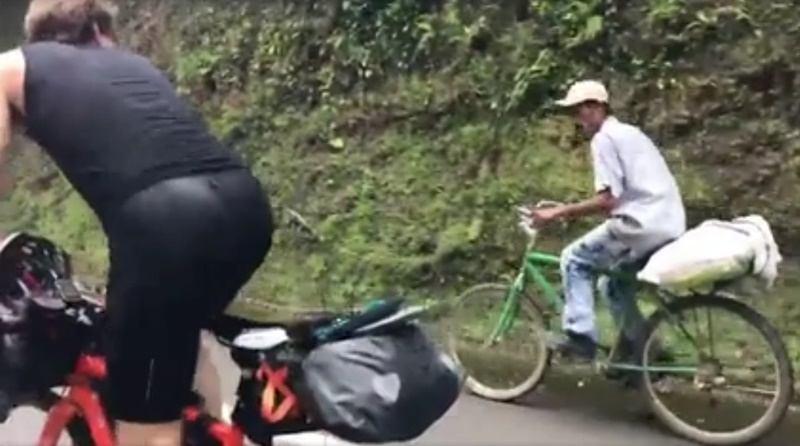 When passed on a climb, who among us can honestly say they haven’t been reduced to telling themselves that it was only because the other cyclist was on a better bike? Alas, that coping mechanism wasn’t available to two athletes overtaken by a farmer during their ongoing attempt to set the fastest time to cycle the length of South America.

Axel Carrion and Andreas Fabricius are in the process of riding 11,000km to raise money for the Pompiers Sans Frontieres (firemen without borders) charity.

The two will follow the Colombian Caribbean coast, the Colombian and Ecuadorean Andes cordillera, the Peruvian coastline, the Atacama desert in Chile and the pampas in Argentina, hopefully reaching Tierra Del Fuego inside 58 days.

While recently pedalling up a climb in Antioquia in Colombia, they were passed by this guy, who despite his less-than-cutting-edge bike seemed profoundly untroubled by the gradient.

“Andreas is getting ridiculed right now,” says Carrion, who is filming. “We are in pain here,” he adds.

Now, you might argue that Carrion and Fabricius might be feeling a little fatigued as a result of their endeavours. However, they set off on December 29 and bumped into ‘Luis’ on December 30.

Plus, it sounds as if their rival has been putting a few miles in himself. The text accompanying the video reads: “We passed by Luis on our way to Dabeiba, he is riding 100 kilometers with 2000 meters climbing every day on that bike. This guy is strong !”

According to Fusion, Luis has since been promised a new bike by a local TV station. We’ve no idea why as he seems perfectly comfortable with the one he’s got.

The incident also brings to mind a 2013 video in which a Belgian postman took on Philippe Gilbert on a climb – but only after they swapped bikes.