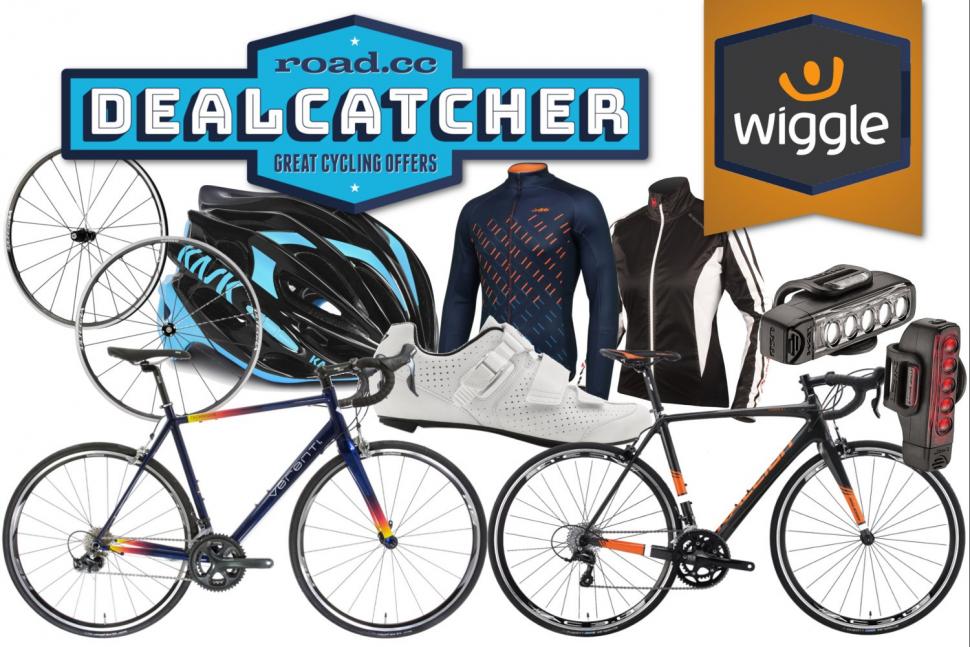 Loads of bargain dhb gear, 9/10 road.cc reviews as far as the eye can see, a carbon Raleigh & a Varenti bike, plus Giro shoes & more
by Elliot Johnston

There are all sorts of cycling deals creeping out of the woodwork in 2017, but there are few places that they're more abundant than over at Wiggle.

The list below is just the tip of the massive dealy ice berg that can currently be found here on Wiggle's website; but we're certain you'll like the selection we've got for you here.

We've got two bike deals - from Raleigh and Varenti - a couple of waterproof jackets, a wheelset, a light set, a jersey, a helmet and a pretty fancy pair of Giro shoes.

"Fast enough to race but comfortable enough to ride all day." That's what Raleigh says about its mid-range Criterium Elite carbon road bike.

We reckon that description does the bike an enormous injustice.

Our tech editor Dave Arthur took the lower-end Criterium Sport out for a spin and lauded the value that the machine offered. He said: "[The Raleigh Criterium is a] cracking bike for the money, and one that isn't easily embarrassed by more expensive rivals."

Away from Raleigh's full carbon offering, Verenti's aluminum technique offers excellent value and the perfect set up for anyone who fancies a cycle commute in the new year.

Our man Stu Kerton put the Technique through its paces and said it offered excellent value for money.

This comfortable commuting or audax machine has a 6061 alloy frame, a full carbon fork, Shimano's Tuagra groupset and RS010 wheelset, alongside Cosine finishing kit, to provide incredible value even at full  price.

At sub-£500 prices, the bike's a steal. Perfect if you're toying with the idea of riding to work.

It's pretty chilly at the moment; we're not sure if you've noticed. But you might have also noticed that it hasn't been consistently chilly all winter.

That's the thing about British winters these days; they're changeable.

Endura's Pro Jetstream Jackets are ideal for changeable conditions, at least that's what our esteemed reviewer Liam Glen says about them.

It's a slim-fitting, long-sleeve jersey-cum-jacket that features windproof panels in exposed areas, and a comfortable warm lining.

That combination means it's well equipped for most weather conditions, and it's slim fit means you can easily wear another layer over the top should things take a turn for the worse.

Shimano's Ultegra Wheelset aren't the flashiest around. They're not the lightest, but they're very strong, they're fast, they're tubeless-ready and we'll wager they're up there with the best value set of wheels out there.

Our head honcho Dave Atkinson took them out for a spin and reported back that they performed very well.

He gave them an 8/10, and said they're perfect for training and racing.

If you're after a well-made and dependably waterproof cycling jacket, dhb's Flashlight will do an excellent job.

Our man Stu Kerton highlighted those exact features when he reviewed the compact version of the Flashlight a couple of years ago.

The range is designed for winter training rides, which make them the perfect option for January-through-March. Stu's concerns about the jacket's breathability should be less of an issue with the non-compact version.

Dhb highlights this jacket's breathability in its blerb.

Cycling shoes are often at their best when you aren't noticing them at all.

The interface between you and your bike; if you can't feel them, they're doing an excellent job.

Our man Liam Cahill says that Giro Trans Road Shoes do just that.

He also noted that they'll appeal to both seasoned racers and cycling newcomers. Win, win.

Another 9/10 road.cc reviewed item at a bargain price over at Wiggle.

dhb's "super-comfortable" ASV bib tights are currently in the DealCatcher spotlight, and for good reason.

Our man Stu Kerton says that from pad to cuffs, these bib tights "put more expensive tights to shame."

Bike lights are important all year round, but they're far more important in the winter when you need to use them significantly more frequently.

These Strip Drive lights from Lezyne are stylish and potent, according to our reviewer Shane Audane.

They're rugged, they'll see you through miserable commutes and weekend jaunts, and offer excellent value.

While we haven't reviewed the Blok Diamond Thermal Jersey specifically, we did take the cool-weather Micro Roubaix jersey out for a spin, and if this one's anything like that one, £37.50 is a steal.

This one's set up for the colder days than the review you'll read below, but we'd argue it looks significantly better.

Our man Ash Quinlan called the Mojito "an excellent helmet" and gave it a road.cc 9/10.

It's got a small, sleek, footprint on your head, and will make you look like you're wearing "the leather-style head protection the pros used back in the 70s, only with 21st century protection standards."