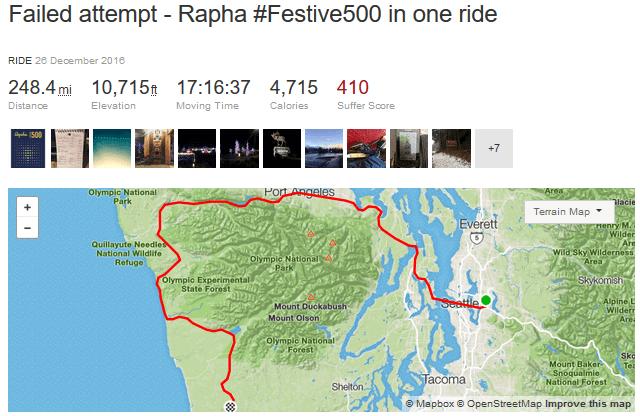 There are heroic failures, and then there's THIS: Cyclist's attempt to do Rapha Festive 500 in one ride thwarted by snow, driving rain and ice

A man who tried to complete the Rapha Festive 500 in just one ride managed to cycle around 400 kilometres through the cold, driving rain and snow before a fall caused by ice and mechanical issues with his bike forced him to give up.

Daniel Perry from Washington state in the Pacific Northwest of the United States, said in a blog post about his Herculean effort that he only took up cycling in summer 2015 and it’s fair to say the bug bit him hard.

By the end of November, he had completed two Strava climbing challenges on a hand-me-down, flat bar Schwinn bike that a friend had given him.

He originally intended to ride the Rapha Festive 500, which challenges people to ride 500 kilometres between Christmas Eve and New Year’s Eve, in December 2015.

He was forced to abandon his plans after his appendix was taken out shortly before Christmas that year, but was determined to have another crack this time round.

By now, with an ‘Everest’ under his belt, he didn’t see riding 500 kilometres in a week as that much of challenge, so he resolved to do it in one ride on his new bike, a Cannondale CAAD 12.

Using his Strava heat map, he plotted a circular route that included roads on the Olympic peninsula that he had not ridden before, totalling 401 miles and with 12,000 feet of climbing, allowing himself around 40 hours to complete it.

Conscious of the remoteness of parts of the route and the lack of options to abandon, he equipped himself with battery packs to re-charge his lights, phone and Garmin, and enough food and water to last when riding at night or for long stretches away from towns.

He also researched the historical weather in December for places along the route, determining that if anywhere had a temperature below 34 degrees Fahrenheit (1 degree Celsius) or there was a risk of snow, he would cancel his plans.

Before Christmas, he went on a 100-mile winter solstice ride with friends, and fell due to ice. “It was both painful (to fall on) and incredibly humbling,” he wrote. “I wanted no repeats.”

He had also aggravated an old knee injury in November, and said that ahead of setting out in the early hours of Tuesday 27 December, “I didn’t tell many people what I planned because I knew it wasn’t necessarily safe and I didn’t want anyone talking me out of it.”

Well-rested over Christmas but unable to sleep the night before due to the excitement, he decided to get the 00:45 ferry to Bainbridge Island. “Why wait?” he wrote.

“I wasn’t going to sleep and my body was as rested as it could be otherwise. So I hit that big red button all the great movies teach you not to press: ‘Begin Adventure’.”

Shortly after beginning his ride, having climbed to an elevation of 500 feet, he discovered snow – something he hadn’t expected “at all.”

He said: “It had recently fallen and was only on the shoulder. I experimented with traction and found it was not icy and my tyres easily cut through it.”

A puncture that proved tricky to fix – he had bought new tyres for the ride – held him up in the small hours – and shortly afterwards he found that one of the roads on his route was a highway with “far more traffic than I expected.”

By now, it was raining too, and the state of the roads had taken their toll on his drivetrain, making it almost impossible to change gear. A bike shop in Port Angeles managed to clean it up a bit and adjust the cable tension, and he set off “with shifting back to about 80 per cent.”

The s#!t hits the fan

It was after Port Angeles, however, that Perry says “ the proverbial s#!t hit the fan.

“It is the point an intelligent person would have shouted ‘uncle’ and turned around for home.

“But no. I have found I have a dangerous aversion to backing down from a goal.”

The first problem was a road around Crescent Lake. By researching his route on Google Street View, he expected to find a yellow sign giving advice to cyclists (but illegible online), but it was missing.

The sign would have warned him that logging trucks use the road, which has switchbacks, reducing drivers’ visibility, and that on one side there is a barrier with a sheer drop the other side.

It would also have alerted him to a button that would have allowed him to switch on a series of warning lights along the route to alert drivers to the presence of a cyclist.

“The trip around the lake was hard work and nerve wracking,” he said. “There is absolutely zero shoulder on the highway here.

“On the lake side is a guardrail. On the opposite side is a ditch and a very steep wall. It is very curvy which creates short sight distances.

“The road is also frequented by logging trucks. Lots of them; traveling in both directions and often at the same time.”

Meanwhile, the rain got heavier and heavier until turning to snow, making him “Cold, terrified, wet, AND nervous.”

It turned out that despite a maximum elevation of 1,200 feet, the road he was heading up “was a genuine mountain pass” that he had overlooked in his research – and at its summit, there was three inches of snow on the shoulder.

Coming down into the town of Forks, he booked himself into a motel for a few hours to have a bath and rest before continuing on his ride that evening, including a 15-mile stretch along the Pacific that he called “the most pleasant part of the trip.”

Back inland, though, the snow was back and the temperature was below freezing, and he was having problems again with his gears.

It began to rain, with the downpour getting heavier and heavier, and with the water turning to ice, he felt his tyre slip, “Just a bit, although I was immediately alert.”

He continued to ride, trying to second-guess where the patches of ice would be.

"I didn't even see it coming"

“I didn’t even see it coming,” he said. “One moment I was upright in a tire track close to the centre line of the road and the next I was sliding on my side down that same road.

“The wind got knocked out of me, although I seemed to land mostly on the hydration pack. I could feel more than see the bike sliding ahead of me.”

While he had escaped injury, his bike didn’t come out of it so well. “It landed on the drive side and I could see the rear derailleur was messed up. The rear wheel wouldn’t spin.”

The end of the road

It was around 4am. Still 20 miles from the nearest town, and with frozen feet (and cycling shoes) making walking impossible, and as he was wondering whether the bike could be fixed, he saw the headlights of what turned out to be a Sheriff’s department car.

Reluctantly, putting his bike on the back seat, he abandoned his attempt and climbed in.

Asked by the deputy who was driving the car, he told him “I was attempting to ride around the peninsula from Seattle without sleeping,” expecting that to be greeted with incredulity.

“Ahh, I get it,” said the deputy, who turned out to be an ultrarunner currently training for a 200-mile event.

“I could not have been more relieved and comfortable to climb into a law enforcement vehicle,” said Perry.

Arriving at the town of Aberdeen, he had breakfast before deciding to complete his journey home by bus, which would take five hours.

“Considering it takes about three hours to drive the distance by car with no stops that was fantastic news,” he said.

Uploading his ride to Strava, his journey home was shortened when a follower offered to meet him part-way and drive him the rest of the way.

“He was a very welcome sight,” Perry wrote. “He also didn’t give me a hard time for my misadventure; although I never actually heard him say ‘I can’t wait to try that,’ I’m confident he was thinking it.”

Home 36 hours after setting off and awake for 52 hours, he finally fell asleep.

The Rapha Festive 500 awards a prize for the ‘Most Epic Failure’ and it’s hard to imagine an attempt that would be better-deserving of that than Perry’s, but for one thing.

“I recovered quickly and was able to use my gravel bike to complete the Rapha Festive 500 challenge on the last day,” he said.

“It was not warm but mercifully dry and free of ice and snow.”