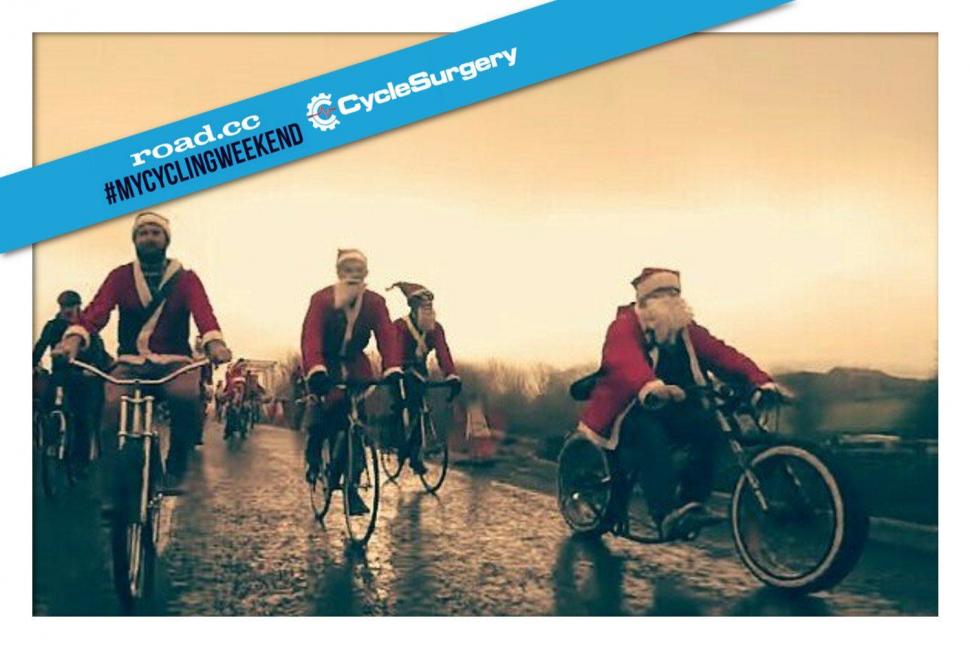 We saw some odd attire this #mycyclingweekend, but the most important thing is you all got out for a ride!
by Elliot Johnston

Here at road.cc and over at Cycle Surgery we're like elves, busying about making sure everything's in place before the big day. There won't be much time for rest and riding over the next 6 days, which is why we're taking our time right now to look back on anothe great #mycyclingweekend.

We asked you to share your choice of attire with us this weekend. We shared ours with you, as you can see from the videos and photos below; and thankfully you joined in on the fun too.

While some of our clothing choices caught some criticism from you lot, we'll be doing none of that. No, we won't even be criticising the bizarre collection of Santas and elves we saw over the weekend.

Despite all the Christmas cheer, though, it wasn't a clothing shot that won this week's prize. Yes, we know, that goes against the purpose of having a themed competition. Believe us, you'll understand when you see the photo.

Jaunce, or @SSkillzAcademy as he's known on Twitter, took these breathtaking shots of the chilly sand dunes in the UAE. Fire us your postal adress, Jaunce, and we'll get your prize posted out to you!

Back on our shores though, the Christmas fun was well and truly in full swing.

Jims Wheels sent us this shot of a gaggle of Santas rolling about, which we thoroughly enjoyed, and Chris Hagen got dressed up for the ocassion too alongside the Sefton Velo bunch.

Sefton Velo xmas dinner ride. 32 miles, 3 course meal and some wine. I'm sure this is how the pros do it. #mycyclingweekend #festive #sv pic.twitter.com/gwtVNewuog

Our news editor Simon MacMichael spotted a bizarrely attired Wiggo-a-like, and Mr Matt Howes and I took to the Wiltshire muddy hills. The result was a well-earned bath.

A baselayer, short sleeved jersey, fingerless gloves and bib shorts were just enough to stave off the frostbite. What did you wear this #mycyclingweekend #cyclesurgery

Remember, it's never too late to get in on the action, just fire up a device that's connected to the internet, log in to Twitter or Instagram and upload a photo with the #mycyclingweekend and #CycleSurgery hashtags in the caption!