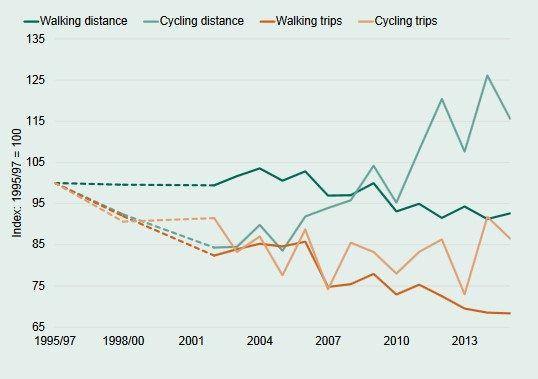 Slight decline in number of cyclists according to latest government figures

The overall picture appears to be one of stagnation. Transport Statistics Great Britain 2016 reveals that cycling accounted for two per cent of trips in England in 2015 and one per cent of distance travelled.

Many of the figures are based on the Active People Survey, the annual Sport England telephone survey, and this highlights how cycling rates vary greatly between authorities.

The DfT figures also reveal that 42 per cent of people in England aged five and over owned bicycles in the period 2013–2015. Those in their sixties are least likely to own a bike, followed by twentysomethings.

The Active People Survey also indicated that despite the number of women who are regularly active being at a record level, cycling participation is down by four per cent compared to a year before. While gymnastics, boxing, and football saw an increase, cycling saw a drop in participation of around 85,200.

"More women than men think it is too dangerous to cycle, but that danger is more perceived than real. Cycling UK works to tackle that perception by improving cycling conditions so that people of all ages, genders, backgrounds and abilities can cycle safely and confidently. We help provide training so that women and others can gain skill and confidence cycling, while also campaigning for better cycling infrastructure. Providing the right space for cycling has proved the biggest antidote to perceived risk, particularly for female cyclists, the young and the old.

“We hope this work across the UK will see a rise in the number of women aged under 25 taking up and continuing cycling and arrest the decline shown in the Sport England statistics.”