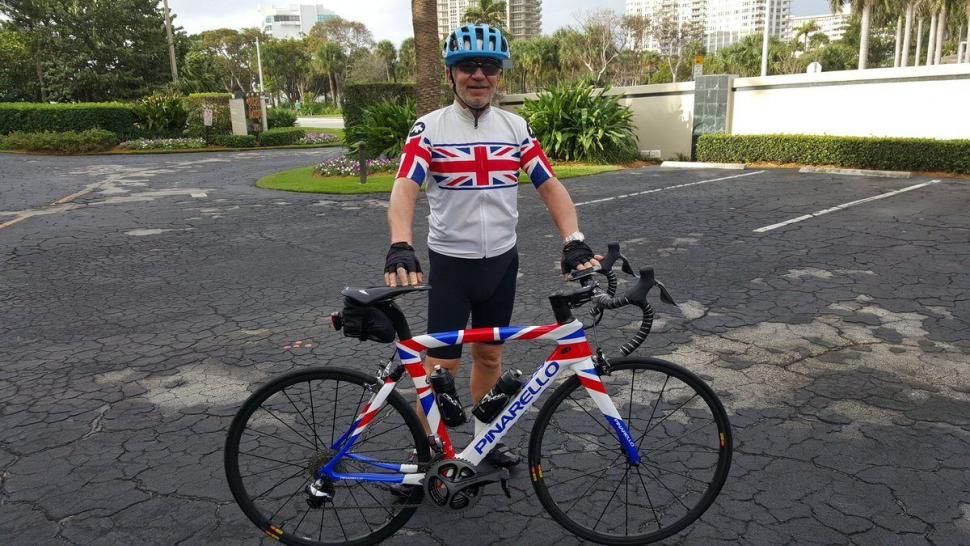 Has the Remain campaigner hopped onto Theresa May's "red, white and blue Brexit" bike?...
by Simon_MacMichael

Lord Sugar is flying the flag at his home in Florida – with his custom Union Flag-painted Pinarello and matching Assos kit.

While he may not be a fan of London’s Cycle Superhighways, The Apprentice star and entrepreneur is a long-time devotee of the Swiss clothing firm and the Italian bike brand.

Sugar, who regularly cycles as part of his fitness regime, has even been known to ferry some of his fleet of bikes around in his private jet.

This particular model was presented to him by The Bike Rooms at the Rouleur Classic show in London in November last year.

However, he was soon back in his limousine and stuck in traffic, leading him to suggest former Mayor Boris Johnson needed “a whack” due to roadworks associated with the East-West Cycle Superhighway.

> Lord Sugar picks up new Pinarello... then moans about being stuck in his limo in traffic due to Cycle Superhighway works

The 69-year-old proudly tweeted a picture of his new kit and bike - the reference to being asked whether he is Australian is due to Florida locals mistaking his accent - although some people on Twitter have been a little taken aback at the set-up.

Special Pinarello. Good news when stopped at lights other riders now dont ask me if I am Australian @YellowLimited pic.twitter.com/6fVuwc9zh9

One Twitter user, in a nod to Prime Minister Theresa May’s remarks earlier this week, asked if it was the “red, white and blue Brexit bike.”

Given Sugar’s vocal support for the Remain campaign ahead of June’s referendum on the UK’s membership of the EU, that’s unlikely.

Perhaps his next bespoke paint job could be blue with yellow stars?