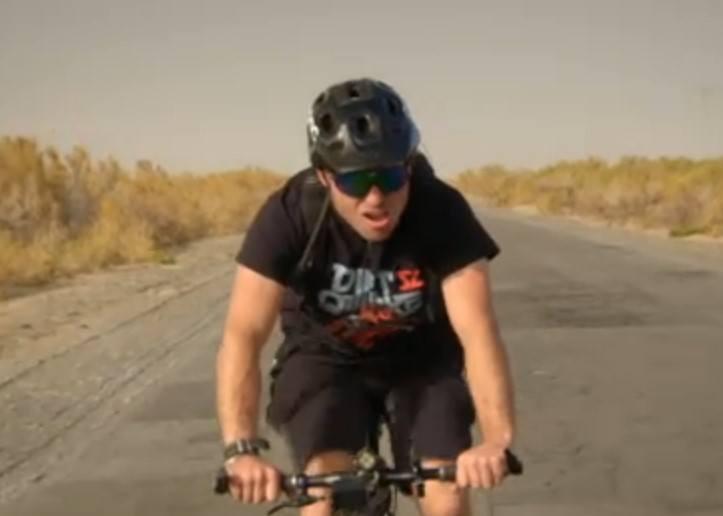 Programme available online and via catch-up services
by Alex Bowden

The third and final part of Our Guy in China sees Guy Martin attempting to set the fastest time for a crossing of the Taklamakan Desert on a bicycle. To achieve his arm, Martin needed to ride the 341 mile highway through what is known as the desert of death in under 47 hours.

Summer temperatures average 40C in the Taklamakan and sandstorm winds can reach 150mph. Local legend has it that once you enter the desert you never come out. Considering there’s a road right the way through it, that seems inaccurate –but even so, it’s quite an undertaking.

The record was set in 2015 by British cyclists Laurence Gribble and Nick Codrington, who stopped to sleep for just four hours midway through. They described the experience as the worst two days of their lives.

It would be wrong to say the record was hotly-contested though. In Gribble and Codrington’s own words: “To the best of our knowledge this sets a new world record, as we don’t reckon anyone has been stupid enough to attempt the crossing before.”

Martin apparently faces an additional challenge however, in that the metal in his bones from various motorcycling injuries apparently aches in the cold morning air of the desert.

At one point fatigue causes him to start nodding off while riding and he swerves off the edge of the road. He stops in a layby for much needed food and rest, but can't sleep because of his overactive mind and so decides to just push on through the night.

The episode was on Channel 4 last night, but can be found online and via catch-up services.

This is far from being the first cycling-related record attempted by Martin. Previous programmes have seen him try to pedal an airship across the Channel, tackle the 24-hour tandem record and attempt the motor-paced British speed record.

1
Police chief says clip of Range Rover driver hitting cyclist with car doesn’t tell full story
2
Near Miss of the Day 813: Audi driver passes oncoming cyclist at speed on narrow country lane
3
Near Miss of the Day 812: Van driver hits cyclist during impatient overtake on country lane
4
You can be the first to own the new Colnago Prototipo… but it’ll cost you – plus more tech news from SRAM, Pirelli, Brompton, Apidura and more
5
Government to crack down on “reckless” riders with causing death by dangerous cycling law
6
Police officer dishes out fines to cyclists – then crashes his SUV into one in a cycle lane
7
"Unacceptably gross": Peloton cyclist's complaint over relative leaving bike in a sweaty mess goes viral
8
road.cc Recommends gets refreshed with 14 brilliant products