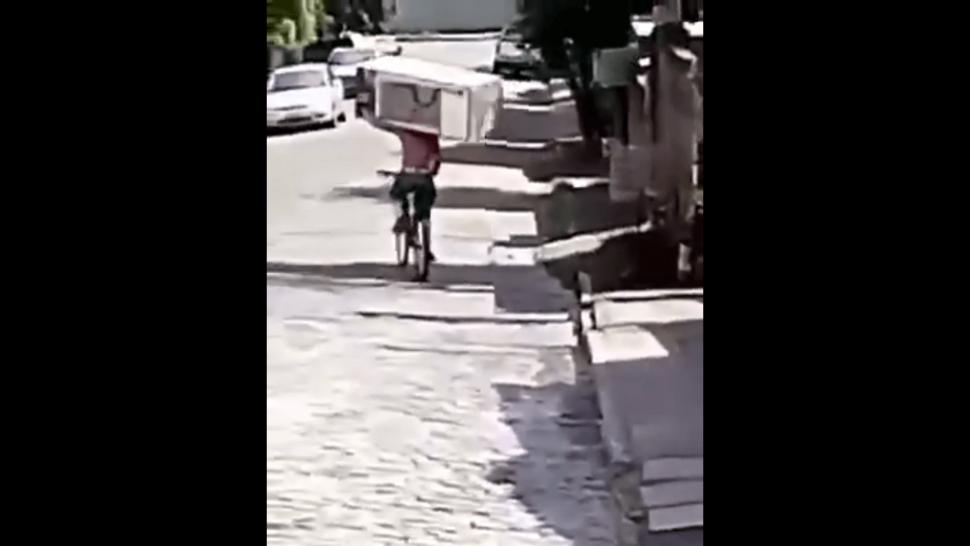 Man cycling in Brazil with fridge on shoulder

Video: is cycling with a fridge on your back the new cargo biking?

Think your commuting rucksack is heavy? But is it Russia or Brazil topping the 'strangest cycling phenomena' charts?...
by Laura Laker

If you don’t have a car, you can move a fridge on your bike, apparently. At least you can if you’re this guy.

We're not sure if this was filmed in Brazil, or possibly Russia, but Men’s Health Espana posted a video on its Facebook page today, showing a man hoisting a – clearly heavy – fridge up and onto his shoulders, before mounting a bicycle and riding away along a cobbled street.

They used the caption: “When we recommend combining a weights and cardio workout, we do not exactly refer to this...”

We thought that was impressive. Then we spotted this guy, from last year, and realised fridge carrying man isn’t alone.

Of course every day, around the world, people go about on their bikes balancing improbable heavy, bulky items on their backs.

These aren’t the first blokes we’ve spotted in carrying unusual things on a bike. Remember the man in Brazil who balanced a watermelon atop a gas canister atop his head while cycling?

It’s not even the first time we’ve spotted a man balancing a fridge on his back while cycling.

We've also seen some of the narrowest, seemingly impossible near-misses come out of Russia; thanks, in part, to the fact so many drivers in that country now have dash cams. Remember the time two lorries collided head on, spraying a pair of cyclists with the debris of one obliterated vehicle, yet somehow not knocking either rider off? Or the time a cyclist in Russia walked away after being hit by a careering lorry at a junction, which had just hit a car, before piling into a verge on its side?

People in Russia also carry unusual things on bikes, of course. Remember the cat in Russia who rode on his owner’s shoulders on bike rides?

A cat is obviously a bit lighter than your average fridge, which can weigh 90-180kg, depending on the age and size of the machine. You can reduce the weight by removing the door before moving it, but then you’d have to go back for the door.