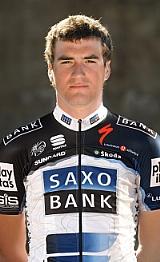 Nearly a year after coming close to death in a scooter accident in Italy that left him in hospital in an induced coma and with horrific injuries including a fractured skull, Jonny Bellis has been named in the Team Saxo Bank squad for next month’s Tour of Britain.

The Manx rider, who returned to racing in June’s national road race championships, last rode in the race in 2008 as a stagiaire for the then Team CSC-Saxo Bank and finished 12th overall.

Race director Mick Bennett said: “I’m delighted to welcome Team Saxo Bank back to The Tour, as they have been one of our staunchest supporters, and have enjoyed great success in the event. It is fantastic to have the world’s number two ranked team riding The Tour, a team who I’m sure we will be hearing a lot more of next year thanks to their recent signing of Tour de France champion Alberto Contador.”

Bennett continued: “I am also pleased to see Jonathan [Bellis] returning to The Tour this year, and I, and all of the organising team, wish him all the best for the race. I’m sure he will see a lot of support from the British public during The Tour.”

Two British teams that figured in the Tour Series earlier this year will be making their first appearance in the Tour of Britain, Sigma Sport-Specialized and Team Raleigh.

Fo Simon Richardson, team leader of Sigma Sport-Specialized, Stage Five from Tavistock to Glastonbury will take him on familiar roads close to his home town of Shepton Mallet.