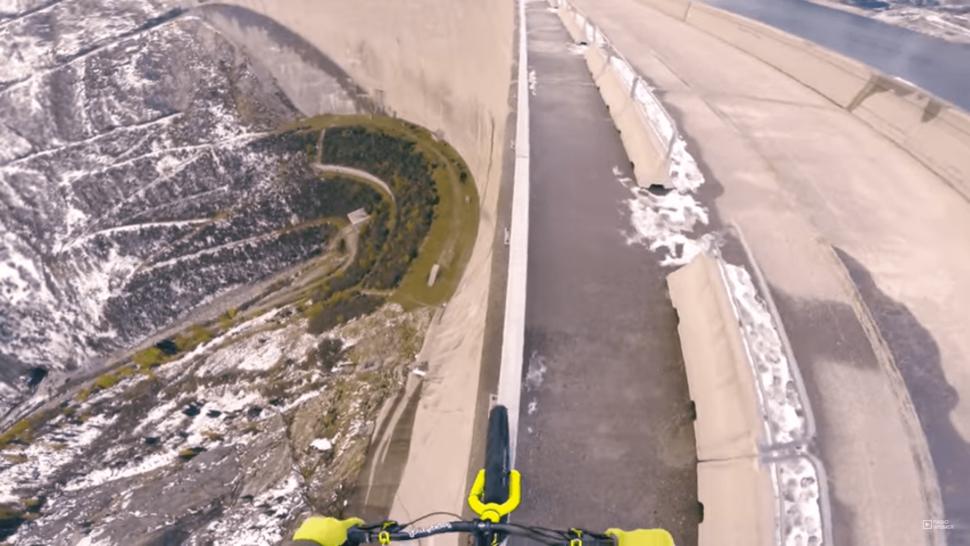 Video: Cyclist rides railing on top of 200ft dam (in the ice and snow)

Fabio Wibmer - 21-year-old trials rider of downhill shopper bike fame - did the stunt "just secured by one guy and a rope"...
by Laura Laker

Watch one man cycle along a railing perched atop a 200ft dam, with only rudimentary safety equipment, for a GoPro competition - if you can bear it.

During the stunt Fabio Wibmer, a 21-year-old street trials rider, who recently wowed fans tackling an epic downhill on a rusty old town bike, had only a man with a rope, and his supreme balancing skills, between him and certain death.

The footage, filmed from a go-pro mounted to Wibmer’s helmet, shows his wobbly front wheel flirting with the grim expanse of near-vertical concrete that is Austria’s Kölnbrein dam, over an icy hillside far below. The resulting three minute clip was Wibmer’s entry to GoPro of the World contest, which offers a $15,000 grand prize.

The top of the dam was scattered with snow and ice, and there was clearly a stiff breeze blowing up there; a slight misjudgment could have been lethal.

When asked in an interview with Redbull whether he had any safety measures in place, he replied: “Yes, otherwise it would have been totally irresponsible”.

Saying that, his definition of responsible may differ from ours.

He adds: “Although I was just secured by one guy and a rope, which wasn't really a safe way to do it.”

“I'm definitely happy that I didn't need his help, because I don't want to know how it would've ended if something had gone wrong. Clinging with 85kg on a rope held by only one person could have ended up being a very bad situation.”

Wibmer, whom you may also remember from Danny MacAskill &co's 80s rock homage, Drop and Roll, made several attempts on the dam railing, as strong winds “made it really tough”.

“In the end it took me about seven tries to get to the middle of the dam. I don’t think I’ve ever been so full of adrenaline in my life!” he said.

He’d been looking for new spots to film when he discovered the dam on Google.

“I just thought how awesome it would be to ride across the thin rail on top of the 200m high dam. I had the idea, searched for the perfect dam and went there with some friends,” he said.

He admits to having second thoughts, but in the end decided to go ahead with the stunt.

His stunt kit list includes a helmet, goggles, shin, knee and ankle protectors, and a neck brace, among other things.

Wibmer is not the first to see a dam and think ‘cycling opportunity’. Remember this guy, last year, who cycled down the face of a dam?

The GoPro of the World contest, which has been open since June 30th, ends tomorrow. The 10 best edits from each month will be selected and voted on and the clip with the most votes receives $1,200. The top three from each month then go into a “bracket challenge” and an overall winner is selected for the $15,000 grand prize. Entries are judged equally on composition and framing, perspective and degree of difficulty of shooting, performance and style, and overall beauty and lighting.