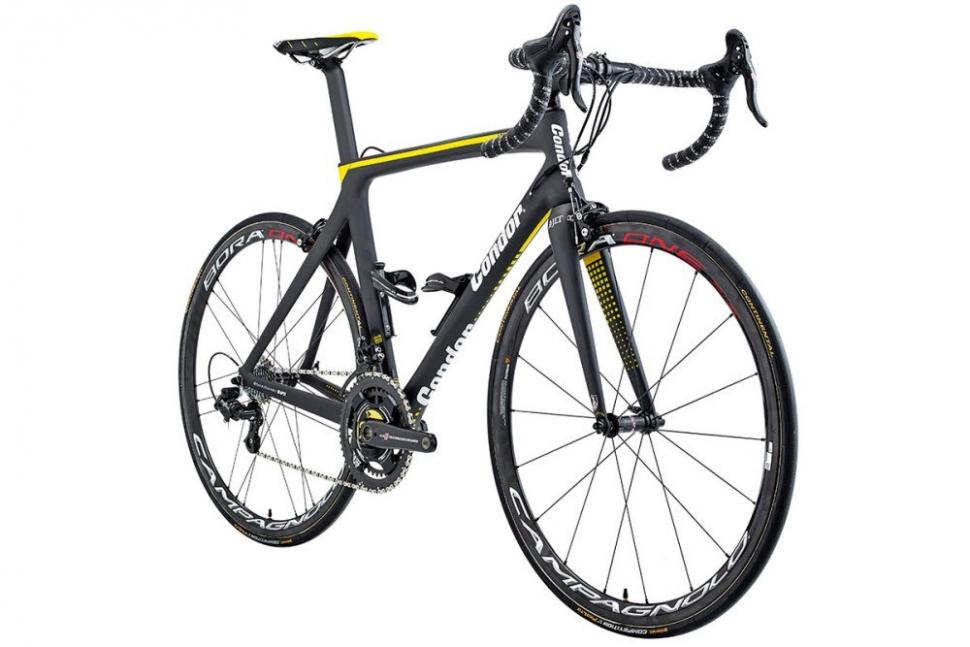 Around ten JLT Condor bikes, including Olympian Ed Clancy's racing machine, were stolen from a Central London warehouse over the weekend...
by Laura Laker

Thieves have stolen a handful of JLT Condor team bikes from a warehouse in Central London, including Olympian Ed Clancy’s racing bike, road.cc has learned.

Around ten team bikes, with a combined value of around £50,000, were stolen from Condor’s warehouse, near Tower Bridge, in a break in some time between Saturday afternoon and Monday morning.

All bikes were the 2016 black and yellow custom Condor frames, with unique reference numbers, specific to each rider, marked on the bottom bracket, and in the case of Olympian Ed Clancy’s bike, his name on the frame.

"Some are racing bikes, and some are training bikes.

“Unfortunately Ed Clancy's bike was taken. Somebody out there has got an Olympian’s racing bike.

"They’re going to have a bit of a difficult time riding it because he’s got an extreme position and he’s a very tall fella. Even if Ed Clancy’s name gets removed from the frame whoever tries to ride that bike will have a difficult time.”

"It's unfortunate but we aren't going to be too down about it."

Our warehouse was broken into & 2016 team bikes were stolen. If you see any please contact us, info [at] condorcycles.com pic.twitter.com/RjV7FPbmQn

The stolen bikes are all fitted with Campagnolo Record and Super Record group sets, Fizik finishing kits and black and yellow paintwork and saddle, in sizes 52, 55 and 58cm. They are estimated at around £5,000 each.

Beaumont said the fact all the bikes are custom built to each rider, and some are prototypes, will make them easy for Condor to identify, and difficult for thieves to sell.

Condor is still assessing how many bikes, and which ones, were taken. Beaumont emphasised some team members still have their 2016 bikes.

"Some of the riders in the team still have their 2016 bikes, so I just want to make it clear that if you see Russell Downing riding on one, don't take him out!", she said.

Riders will also all receive their 2017 bikes, which weren’t affected by the break-in, and all riders all still have bikes to train on.

Condor have informed the police and are looking at CCTV footage from its warehouse.

"If somebody does locate one of these bikes we would be very interested to hear about it. I am sure we can do something for someone who has some information that can lead to resolving it," said Beaumont.

1
Owner fined after dog sparks deer stampede in which 10-year-old cycling with family was injured
2
Near Miss of the Day 548: Driver makes exemplary overtake ... but almost takes out penny-farthing rider coming in opposite direction
3
Sigma Sports set for expansion as private equity firm buys into business
4
The ‘Roadmap out of lockdown’ – what does it mean for cycling?
5
Near Miss of the Day 547: “My fellow riders did not know how I was not hit,” says cyclist as Jeep driver tailgates overtaking motorbikers through pinch point
6
Custom bike specialist WyndyMilla unveils one-off tribute to guitar legend Eddie Van Halen
7
6 highlights from Rapha’s new spring collection
8
Tell us your best UK routes on komoot and win a Garmin Edge 1030 Plus worth £519!