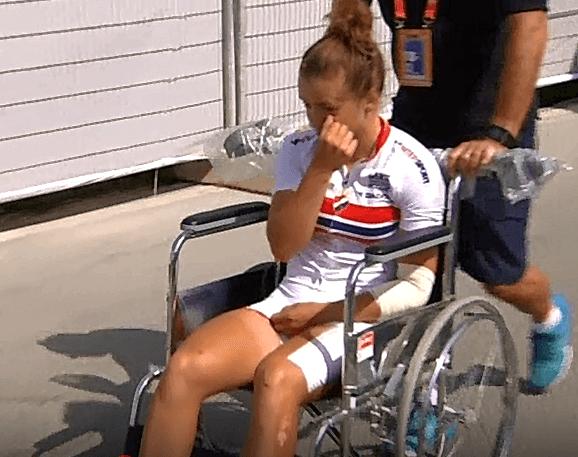 Norway’s national cycling federation has claimed that a police officer in Qatar deliberately knocked one of its riders from her bike during the UCI Road World Championships in Doha last month – and says it may have been because she was considered inappropriately dressed for a woman.

The claim was made in a report on the television channel TV2 by Hans Falk, head of sport at the Norges Cykleforbund, who said the incident happened after Susanne Andersen had completed the junior women’s time trial.

Falk said he was advised not to report the incident to police due to concerns that the 18-year-old, who would take bronze in the junior women’s road race later in the week, would not be allowed to leave the country.

“I’m convinced it was a deliberate act by the policeman who drove straight at Susanne,” he said.

Asked whether that was an exaggeration without evidence to back it up, he conceded, “I cannot say for sure. But there were no skid marks, and he had no sympathy.

“Instead, he lit a cigarette and was talking on his phone without a care for the girl who was lying on the ground screaming.”

Andersen, who suffered nothing worse than grazes and bruises, although her bike was badly damaged, said at her home in Stavanger, “Imagine how bad it could have been?”

Falk put forward one theory that could explain why the police officer may have deliberately driven at the rider.

“We were told that it isn’t that unusual for women with bare legs, considered to be dressed in a challenging manner, to be run over,” he explained.

While the Gulf state does not expect non-Muslim women to comply with its laws regarding dress, foreigners are expected to dress “modestly,” and a social media campaign two years ago urged visitors not to wear items such as shorts or leggings.

Following the incident involving Andersen, Falk says he tried to get the UCI to warn other countries but was told that they were guests in Qatar and had to respect traffic laws.

TV2 reported the UCI as saying that “The situation was handled at the time and reported to the public authorities via the local organising committee.”

The channel added that it had received no reply to a request for a comment from the authorities in Qatar.