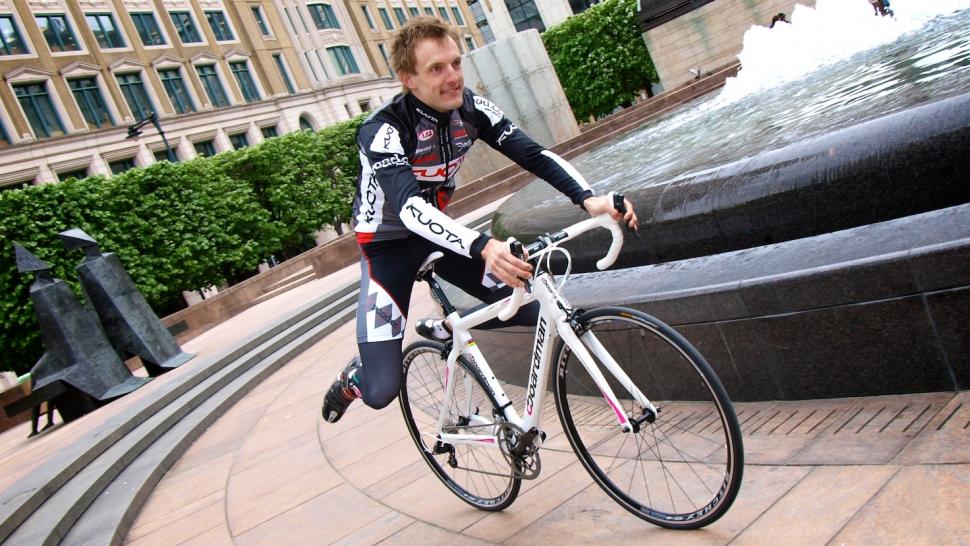 Jeroen Janssen of Kuota-road.cc finished third behind Kristian House of Rapha Condor House in the City of Preston Elite Circuit Race yesterday, and in doing so sealed seventh place in the overall standings as the Elite Circuit Series reached its conclusion.

The Flying Dutchman’s achievement is all the more impressive when you consider that each of the other nine riders occupying the top ten positions following the eight-race series were drawn from the UK’s three Professional Continental squads – Endura Racing, whose Ian Wilkinson won the series, Rapha Condor Sharp, and Motorpoint Marshalls Pasta.

It’s Janssen’s second podium finish inside a fortnight following his second place finish in the Elite race at the Acht van Chaam in The Netherlands in a programme headed by a pro criterium won by Niki Terpstra of Milram from Rabobank’s Robert Gesink.

Team manager Cherie Pridham said that the results were a reflection of the dedication shown by Janssen and the rest of the Kuota-road.cc team following what has been a difficult season.

“We had a difficult start to the year, but thanks to the support from all our sponsors we’re happy with the back end of the team’s season, particularly how we came through the end of the Tour Series, and the hard work put in by riders such as Jeroen and Jefte de Bruin show their commitment to the team.”

She continued: “We’ve got a number of talented riders, but working against the bigger squads is sometimes difficult, and we were hit with a lot of crashes early on. I’m very proud of the way the guys have worked through their injuries and we can be proud as a group, which bodes well for next season.”

Yesterday’s race in Preston saw House and team mate Dean Windsor get off the front of the field early on, as Rapha Condor Sharp sought to put Wilkinson’s series lead under pressure and pave the way for Dean Downing to leapfrog him at the top of the standings.

The men in black kept the pace high at the front of the peloton, but Wilkinson, racing on home turf and vocally encouraged by a largely partisan crowd, refused to buckle despite having seemed to be in trouble early on and moved up through the field in the closing laps to eventually finish fifth and seal his series victory, although that was only confirmed after chief commissaire Peter Deary rejected a complaint by Rapha Condor Sharp team manager John Herety regarding the way in which Endura had ridden to keep Wilkinson’s challenge alive.

A full report and photos can be found on the British Cycling website.