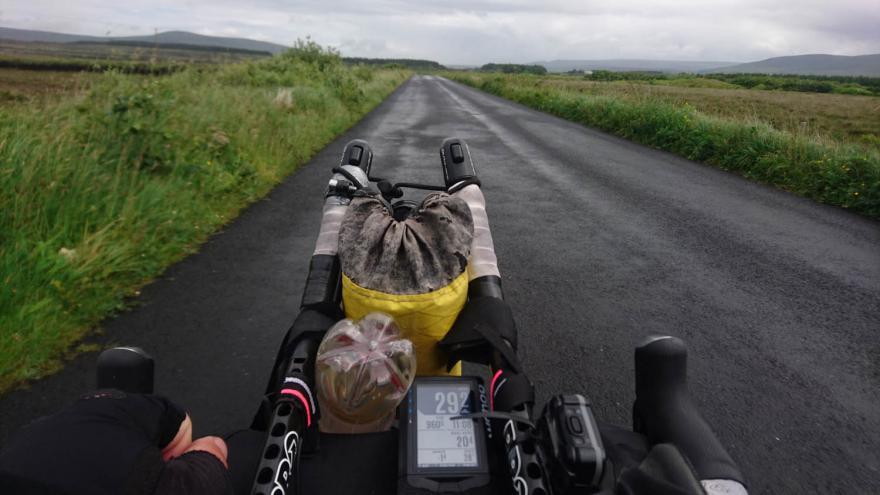 There's less than 20 places left on next year's TransAtlantic Way race, a 2,500km unsupported bikepacking race across Ireland...plus some bonus preparation tips from a 2016 competitor...
by Laura Laker

There are less than 20 places left on the second instalment of the TransAtlantic Way race, a 2,500km, single stage, self-supported bike packing road race across Ireland.

On 8 June, 2017, participants will battle it out against themselves, each other and the elements in a bid to be the fastest to cycle between Dublin and Cork, to cross the finish line at Blarney Castle.

This year, 28 people took part, with German Bernd Paul winning at 6d 11h 33m. The fastest woman of 2016 was Scottish Paula Regener – the only solo woman to finish, who came in third overall – who completed the route in 7d 11h 24m.

Race organiser, Adrian O’Sullivan, said: “Last year I raced the 2014 London to Istanbul Transcontinental finishing in 7th place. This year I raced the TransAmerica from the West to East coast 4,350 miles in 21 days finishing 5th. On my return the most asked question after how many hours and miles I rode each day was ‘what’s next?’ There are many bike packing adventures out there for mountain bikes but I couldn’t find many similar to the Transcontinental or TransAmerica specific to road bikes. So, a new challenge, a new adventure is born – the TransAtlanticWay bike race.”

The route skirts the West coast of Ireland, taking in seven counties and following the Wild Atlantic Way, with a checkpoint at either end. Riders can enter as solo or pairs.

Paula Regener told road.cc she would recommend the race to others - but warned people not to underestimate it.

"It was a very challenging ride and many experienced unsupported racers underestimated it. The rough tarmac, the constant head wind, the rain and the many steep little climbs make you go much slower than most places in Europe or the US. Not covering the expected mileage was tough for many riders.

"I went into the race with zero expectations, which helped a lot. The stunning views always made up for the slow ascents; many of which I actually walked up to save my legs.

"During the entire time of the race i was confused about whether i was actually racing or just on an awesome cycling holiday! I'm signed up to do it again next year because I loved it so much!

Jason Woodhouse, who came in ninth place last year, finishing in 8d 20h 56m, told road.cc: “I've ridden longer ultra races like the Trans Am Bike Race and really thought that The Transatlantic Way would be much more of a race for newbies to these type of sadistic treats.

“I couldn't have been more wrong though, once you clear checkpoint 1 in Derry, the route becomes relentless rolling hills that are purposefully fed into prevailing wind. It's difficult to stay in the same gear for more than a few minutes and those running electronic shifters were definitely onto something!

“A mixture of postcard villages made welcoming breakfast stops in daily sprints across the wild spooky landscape that Luke Skywalker called home in The Force Awakens. With stunning coastal vistas rolling around every corner of emerald green smugglers coves it's difficult to stay disciplined to keep on the bike and not stop for photos with the occasional tourists road tripping the route.”

For 2017 32 solo riders have signed up – only two women so far. You can read Paula Regener’s blog from this year here.

You can find out more about the race here.

Jason Woodhouse also offered some bonus preparation tips for those thinking of tackling the TAW this year.

"I tried to stick with one of the lighter setups of the race, though each rider has preferences and this is very personal. I found it really helped me with the short sharp climbs that dominated the early part of the race around Malin Head. Though there are barren sections of the route and opening times for resupply differ, petrol stations all seemed to offer  hot food to go and the Irish people were very accommodating (when you actually saw some - its a fairly unsociable type of ride) .

"I rode 28mm tyres as the road surfaces, though generally sealed varied from highway to farm track and beach access roads and the 2016 edition included a detour for Donegal Rally that included a gravel section."

"Get training for the hills, tough guys like Race Around Ireland and Trans Am Bike Race veteran Donncha Cuttriss have shown me that shorter steeper rides are far more valuable than long flat rides in your training, the latter just make you great at cycling a long way slowly.

"If this is your first unsupported ultra race though and building up confidence, I'd recommend getting out there and signing up to a few of the larger rides with Audax UK or randonneuring groups, those guys are full of awesome advice and can sniff out a hearty fast meal in the strangest of places.

"Above all try and enjoy your ride though, I've dropped out of races when my heart hasn't been in it, the fast guys in these things you'd think are suffering, but those I've spoken to who keep winning (you know who you are!) above all just generally love riding their bikes. You may want to get used to talking to sheep also :-)"