Road.cc made the journey to Sandown Park racecourse for the 2009 Triathlon, Cycling and Running show.

Triathletes and cyclists seem to be immune from all of the credit crunch, end of the world hysteria sweeping the nation at the moment. They were out in very large numbers over the weekend, the TCR 09 show was packed out on both days. This comes as no suprise given the goodies on display and the calibre of guest speakers passing on the professional's tips for having the perfect race.

In truth, unless time trialling or triathlon are your thing there wasn't that much pure cycling kit on display at the show, and the Evans sportive rides were the one casualty of the bad weather. That said, all the seminars seemed packed including Cyclefilm's Etape recce and Fondo riding ones, and the ones on bike fit. The team from Retul who work with the Garmin Slipstream team talked through some of their rider data on the likes of Wiggins, Millar, and Zabriskie.

On the tri front Olympic triathlete Alistair Brownlee was joined by younger brother and rising star Jonathan along with Olympic kayak gold medallist and triathlete Dr.Tim Brabants, giving seminars and talks along with influential and respected names from the world of nutrition, coaching and health. There were various events taking place across the weekend including the Viner indoor time trial and a 10km cross country run, and there were plenty of athletes willing to get cold and very muddy striding around the Sandown course. 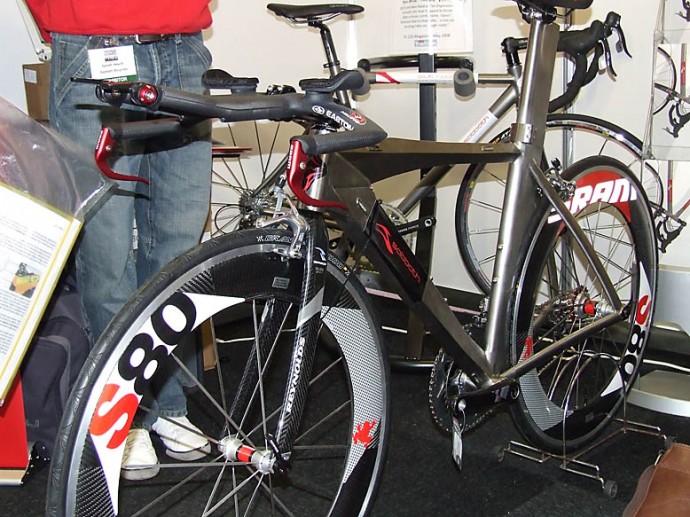 On to the kit. Exciting Time Trial and triathlon bikes and frames were on show from Japanese manufacturer Ceepo, North West England based Sabbath launched their 2009 race team and had several bikes on display including their, angular new TT/Tri frame finished with Sram red parts. The brand new Litespeed Blade and Quintana Roo CD.01 also had TT stalwarts and triathletes buzzing with excitement. The level of technology, research and development appears to have taken a leap forward, let’s hope that these features filter down the ranges so that we can all benefit. 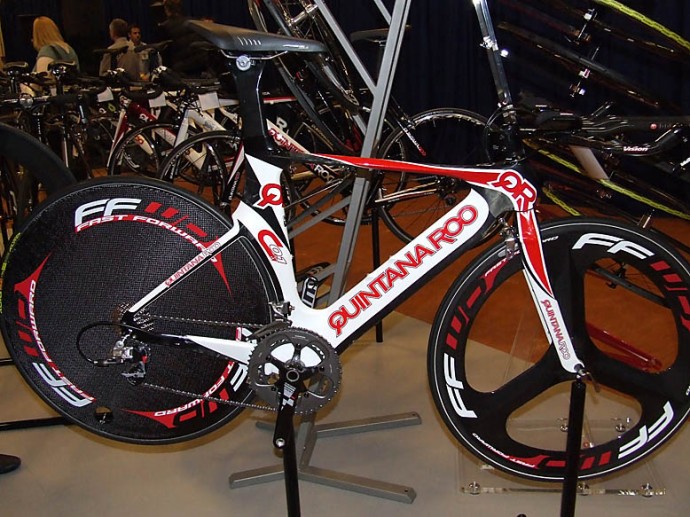 One noticeable difference from previous shows is that so many high specification, top of the range bikes featured Sram red componentry, the more ‘trusted’ Dura Ace was conspicuous in its absence from the headline grabbing bikes at TCR 09 – that said, some manufacturers such as Orbea do offer their bikes in a choice of builds which include SRAM, Shimano, or Campagnolo options. There is no argument that the SRAM Red groupset ticks all the right aesthetic and weight conscious boxes but it has struggled to convince some when it comes to reliability. You would have to assume that these issues have been put to bed now with so many major brands adorning their top end machines with Red – unless of course, it's purely a matter of economics.

Final thoughts on TCR 09, A busy show that perhaps could do with expanding into a larger venue, a great mix of information, events to get your competitive spirit going for the forthcoming season and a wide range of equipment from dealers and manufacturers to suit all budgets. My highlight remains the Quintana Roo CD.01 in full show specification with the new Litespeed Blade frame a close second.