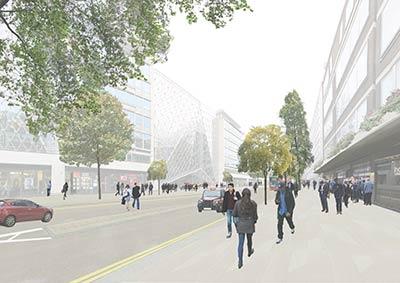 In a recent consultation on a major cycle link Westminster Council separated out cycling responses and discounted them, while ignoring 'critical' safety failures raised...
by Laura Laker

Westminster City Council has been accused of ignoring ‘critical failures’ over cycling safety and of ignoring hundreds of consultation responses from cyclists relating to the overhaul of a major one-way system in Central London.

The Baker Street two-way project will be a key cycling route between Oxford Street and Cycle Superhighway 11. However, the London Cycling Campaign is calling on Transport for London (TfL) not to fund the scheme because of several “critical failures” according to TfL's own assessment criteria, including left hook risks for cyclists, on the route, and the fact the scheme is “capacity neutral” for motor traffic, meaning cycles will mix with heavy traffic on intermittent, part time bike lanes, where those exist.

By separating cycling responses, which were 28 per cent of all responses to a consultation, which ran February to March 2016, and then effectively discounting them, Westminster City Council has been able to claim a majority support for the scheme, which was opposed by between 32 and 51 per cent of respondents, and only partially supported by residents.

The scheme will see cycle lanes on key routes, including Gloucester Place, introduced, which cease to exist at junctions and at bus stops, and are only in operation 7am-7pm. The scheme also boasts Advanced Stop Boxes for people on bikes, and more cycle parking.

This was the second round of consultation on the Baker Street two-way scheme after safety concerns were raised over the original proposals, including over cycling and pedestrian provision.

Munk says while the second phase dealt with some left hook risks, it introduced others, and asserts Westminster City Council has dismissed critical safety fails on parts of the scheme, according to Transport for London’s own Cycling Level of Service assessment tool. He says the scheme, which covers an 800m by 300m area around Baker Street, including 13 junctions, is of strategic importance for London but the current proposal “risks locking in poor provision for years, possibly decades”.

“Given residents, businesses and visitors have all variously said they don’t want it, it is baffling that Westminster and its partners have chosen to push ahead with the scheme. Instead, we call on them to work to create a bolder scheme that works better for everyone.”

An emergency motion was proposed at the LCC’s AGM last weekend to call on Transport for London not to fund the scheme, which LCC says is against London Mayor Sadiq Khan’s stated agenda to make London a more people-friendly city and reduce motor traffic.

Munk said: “All too often, TfL has funded weak schemes with too many barriers or dangerous points for cycling and walking – because some boroughs don’t like cycling. In that case, it can be better to get no scheme, and spend the money elsewhere.”

“Cycling forms a core part of the council’s project and it includes cycle lanes up to two-metres wide on Gloucester Place, advanced stop lines at junctions and cycle-specific traffic lights, which will give cyclists a head start to vehicles.”

TfL says it will make a final decision on the amount of funding it will award the scheme towards the end of the year.

Westminster Council noted a higher opposition than support for new proposals at five locations across the consultation, which is broken down by junction. However, when removing consultation responses from visitors to the area, most of whom were cyclists, voicing concerns suggested by the London Cycling Campaign, there was a higher support for the schemes. 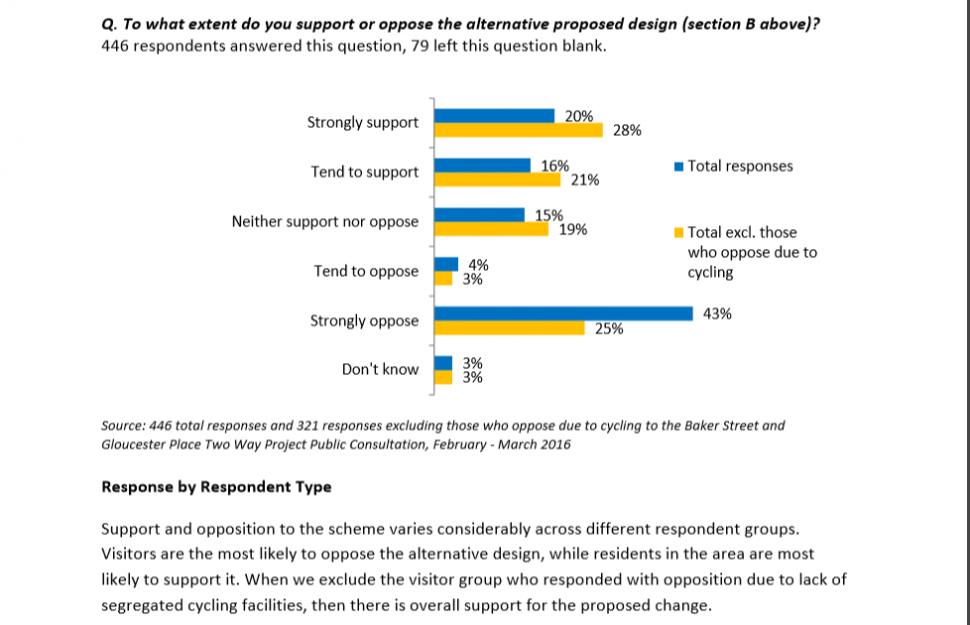 An extract from Westminster City Council’s consultation report, on the junction of Taunton Place and the A41 Gloucester Place Junction, says: “Across the total responses to this question, 20% strongly support the alternative proposed design, with 16% saying they tend to support it. However, there are a higher proportion of respondents who oppose the alternative proposed design with 43% of those who responded saying they strongly oppose it, while 4% said they tend to oppose it."

Those responses include objections based on cycling, which made up 25 per cent of the total, and which the council went on to exclude in the following paragraph, the figures it based its decision on.

The next phase of the scheme involves Westminster City Council consulting on parking and loading bays.

Westminster Cyclists, Regents Park Cyclists and Westminster Living Streets are now seeking to ‘engage very strongly’ with Westminster City Council on its concerns, according to Munk.

Cllr Robert Davis, MBE DL, Deputy Leader & Westminster City Council Cabinet Member for the Built Environment and Chairman of Planning, told road.cc: “Westminster City Council has taken the decision to press ahead with the next stage of the landmark Baker Street Two Way project. As part of this, we will be carrying out a detailed design and traffic order consultation.

“Many local residents and businesses contributed to the last round of consultation, which helped to inform our work going forward in tackling a number of important issues, including cycling facilities, increased accessibility and a reduction in traffic speed.

“The views of cyclists and the London Cycling Campaign were included in the consultation response report, and we have also responded to specific issues raised by cyclists, including ‘critical fail’ widths, ‘left hook’ risks and ‘segregated cycle lanes’. These comments led us to propose a number of changes, as seen in our recently published Cabinet Member Report.

“The proposals include the introduction of two-metre wide mandatory cycle lanes on either side of the carriageway on Gloucester Place and straight across crossings on Marylebone Road. In addition, the proposed cycling facilities on Gloucester Place will significantly help the connection with quiet way routes on George Street and Crawford Street.”

In an email to respondents of the Baker Street two-way consultation, Cllr Davis said the plans would help improve traffic flow while ensuring a safer travelling experience for all, and would "create a more connected and welcoming area for residents, businesses and visitors".