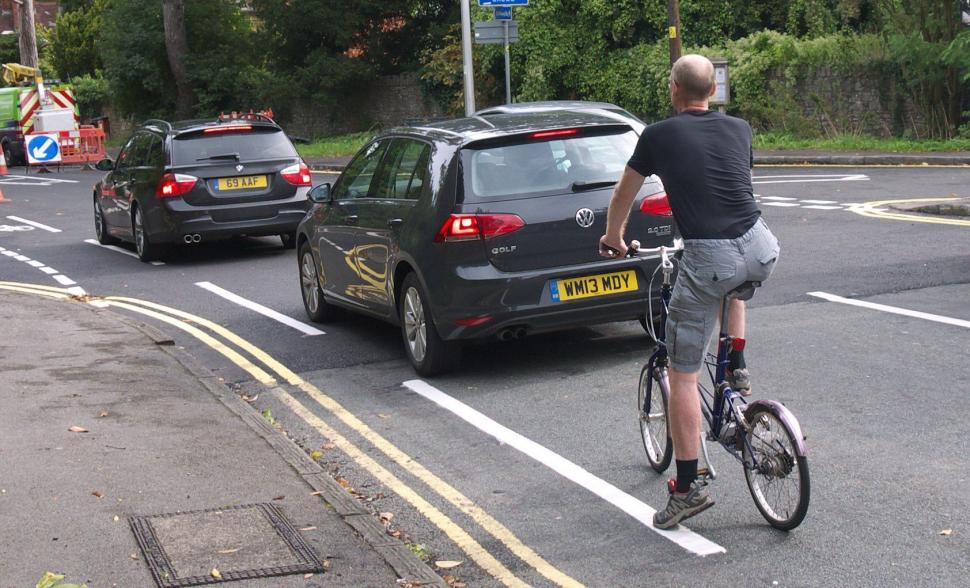 Cyclist not passing on the left - image cc licensed by Sam Saunders on Flickr.jpg

Police say that the pass of a left-turning vehicle on the left is dangerous; the Melbourne cyclist says the car wasn't moving and pass was safe...
by Elliot Johnston

A cyclist in Melbourne, Australia, has been fined $152 for passing a vehicle that he says was stationary and waiting for pedestrians to cross the road in the city's central business district.

The cyclist was 65-year old Laurie Duncan, a long-time member of Australia's cycling inclusion organisation the Bicycle Network. He told newspaper The Age that his pass of the vehicle was safe, and while the car had its indicator on, informing other road users that it was turning left, it wasn't moving because pedestrians were crossing the road.

"I was unaware I was doing anything wrong," Mr Duncan said in a police statment. "I didn't think it was dangerous."

Dangerous or not, Australia's road laws are clear when it comes to the majority of cycling infractions - often to the bewilderment of cyclists in the country.

Australia is renowned for its often criticised bike laws which appear to dissuade many people from cycling. Here on road.cc we've covered stories of bizarre fines for violations of helmet laws, bike light laws, and even no brake laws, but this is a first for passing a stationary vehicle.

>Read more: Cyclist in New South Wales fined for no bell, no helmet, and no brake (on a fixie)

By the book, Mr Duncan was in the wrong. Australia's Road Safety Road Rules 2009, specifically regulation 141(2) show that he broke the law; the regulation reads "the rider of a bicycle must not ride past, or overtake, to the left of a vehicle that is turning left and is giving a left change of direction signal."

To contest the fine Mr Duncan hired a lawyer, and took the case to Melbourne Magistrates Court in September, but lost.

Mr Duncan says he sees many cyclists doing what he did and argued that if the law was rigorously enforced it would "cause chaos."

"Hundreds of cyclists do exactly what I did every day of the week, in the [central business district] alone, and the police do nothing about it because they know that if they enforced this interpretation of the law it would cause chaos," he said.

"I get, 100 per cent, that if you pass on the left and there aren't pedestrians there you're an idiot because you'll get knocked over.

"But when a car is stationary and can't turn because either there's a red light or there's pedestrians there, it happens thousands of times a day that cyclists stream past cars.

"If they enforce this law, what's going to happen now is that cyclists will have to get off their bike and just wait there. It will be just ridiculous."

While Mr Duncan may be incredulous as to how his behaviour has resulted in a fine, the Australian bike organisation, Bicycle Network, which he is a member of has said that the Victoria Roads Comission (VicRoads) is researching behaviour at intersections with the view of changing the laws with regards to Mr Duncan's situation.

Senior policy advisor for Bicycle Network, Garry Brennan, said: "VicRoads has commissioned a study to Monash University, which has set up cameras at intersections to observe behaviour and analyse what is actually happening."