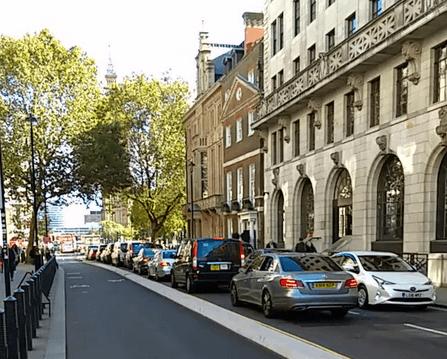 Quentin Willson asks “Where are the cyclists?” – on unfinished Cycle Superhighway that's blocked

London cyclists set Quentin Willson straight on Twitter yesterday after the motoring journalist and TV presenter tweeted a picture of a stretch of Cycle Superhighway near Parliament Square and queried why no-one was using it.

Great new cycle lane but where are the cyclists? pic.twitter.com/a1vhAAXxt2

The reason was revealed by Twitter users including Londonneur, who tweeted a video that began from the view towards Big Ben captured by Willson in his picture then panned round to show that the new lane is blocked by red and white barriers, which also have temporary traffic lights placed in front of them.

Hi @QuentinWillson you wanted to know where the cyclists were? Happend to be passing so I made you a little video so you could understand. pic.twitter.com/ZwZY2A3av3

He wasn’t the only user of the social network to take issue with Willson, however, with others also tweeting pictures from the same location, Great George Street, between Parliament Square (the direction he took his photo in) and Birdcage Walk.

.@QuentinWillson Perhaps, waiting behind the barrier and traffic lights that block the access to it. #TurnAround #Liar pic.twitter.com/xOkI0JLSDU

Figures from Transport for London (TfL) show that once separated infrastructure is in place and fully open, cyclists – including those encouraged to take to two wheels by the provision of safe routes – will take to it in huge numbers.

For example, cyclists now make up 70 per cent of rush hour traffic on Blackfriars Bridge thanks to the installation of the North-South Cycle Superhighway.

@QuentinWillson We can all play this game - the stats show take up is MASSIVE! pic.twitter.com/1OJ77O5kqY

As some pointed out, depending in time of day and issues such as phasing of traffic lights, it isn't that difficult to take pictures of Cycle Superhighways apparently bereft of cyclists, or indeed roads free of motor vehicles - and the part of the East-West route beyond where Willson took his picture is still a work in progress, with evidence from other routes now open showing that once end-to-end infrastructure is in place, it wil be used.

But that doesn’t stop some elements of the media from seeking to mislead about their popularity with bike riders, with the Daily Mail for example publishing an article in August claiming a Cycle Superhighway at Parliament Square wasn’t being used, only for TfL to point out there wasn’t actually one at that location.

Undaunted, the newspaper has continued its campaign against infrastructure for cyclists, not just in London but throughout the country, running an article last week that was trailed on its front page with the headline “Cycle lane lunacy!” and described them as “The new blight paralysing Britain.”