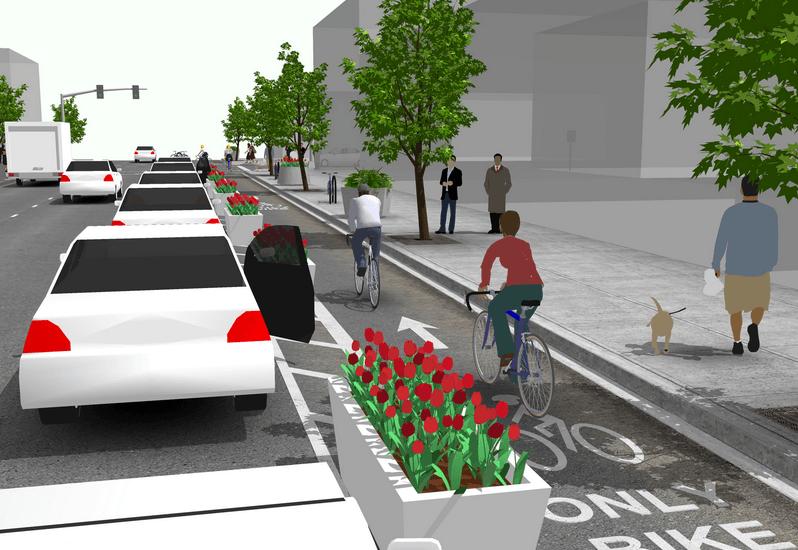 Such lanes, which are widely used in North America and Europe, are located between the pavement and car parking lane spaces, with a buffer separating them from the latter.

According to US organisation the National Association of City Transportation Officials (NACTO), their location “Reduces risk of ‘dooring’ compared to a bike lane and eliminates the risk of a doored bicyclist being run over by a motor vehicle.”

Those were the circumstances in which Leicester schoolteacher Sam Boulton was killed in July when a taxi passenger opened the vehicle’s door into his path on London Road, knocking the 26-year-old into the path of a van.

Speaking to the Leicester Mercury after his return from NACTO’s Designing Cities 2016 conference in Seattle, which he had been invited to address, Sir Peter said that some locations in the city might be suitable for a parking protected lane.

He said: "It is a creative, simple and relatively inexpensive method which means the parked cars actually provide a physical barrier to protect cyclists from traffic.

"It is possible we could apply that in Leicester. There is some potential for it possibly in Granby Street and maybe elsewhere.

"It is something to explore,” continued Sir Peter, who also visited New York City to see the cycling infrastructure put in place there.

"It does not take much. It can sometimes be achieved with a line of paint and perhaps wands to separate cyclists and pedestrians similar to those we have placed on West Bridge."

Leicester Cycling Campaign Group questioned whether the city was suited to such infrastructure, however.

The group’s press officer, Eric Ludlow, told the Leicester Mercury: "It is an interesting idea but I think it would need the kind of space you get in really big cities.

"We would need to see actual plans before saying we were totally behind them," he added.

But Sir Peter said that his conversations with counterparts from North American cities at the conference in Seattle showed that they had much in common.

"They were keen to debate the issues around how you get the balance between competing usage of precious road space,” he explained.

"While many American cities are larger than Leicester we found their share the same challenges and issues with transport that we face – but often on an enormously different scale."

The council aims to increase modal share of cycling to 10 per cent by 2024, and last year its Leicester City Cycle Action Plan was joint winner of the Best Cycle Network Infrastructure Project at the inaugural Cycle Planning Awards.

In May, Leicester was the host of the fourth edition of the Cycle City Active City conference and exhibition, which brought together “all those working to encourage Dutch levels of utility cycling and active travel in Britain.”