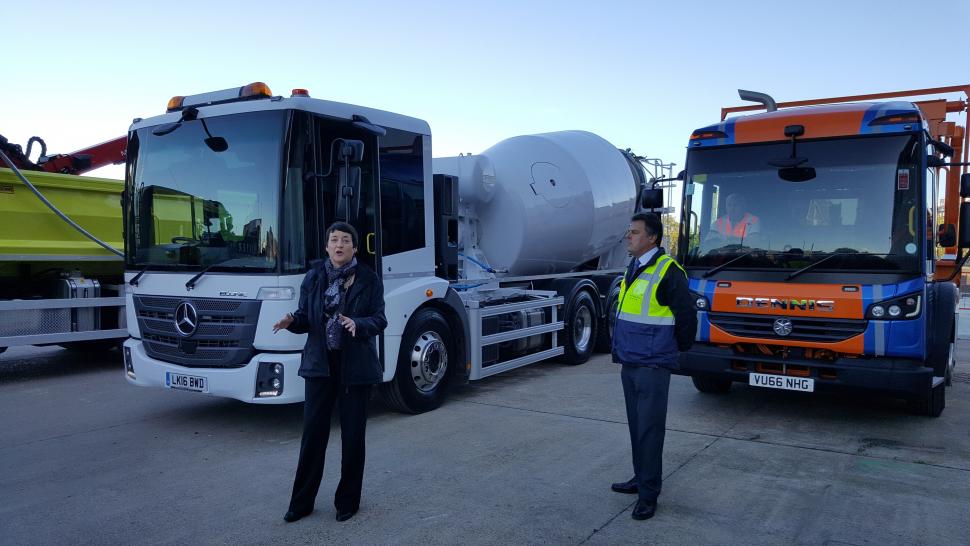 Deputy Mayor for Transport, Val Shawcross, told road.cc the next generation of cycle infrastructure will benefit everyone, not just cyclists
by Laura Laker

London’s new generation of cycle routes will be improvements on those built under the previous mayor, with more focus on short journeys, not just commuters, and safer streets for everyone, London’s Deputy Mayor for Transport told road.cc.

At the launch of the capital’s new star rating scheme for lorries last week, believed to be the first of its kind in the world, Val Shawcross said there will be some improvements on future cycle superhighways, and confirmed the extension to the East West cycle superhighway route, from Lancaster Gate to Acton, and and the North-South extension from Farringdon to Kings Cross, will happen, but that the East-West route may change.

Shawcross also hinted “cycling superstars”, journalists and politicians are among applicants for London’s new Cycling and Walking Commissioner role, and she will discuss potential candidates with London Mayor, Sadiq Khan, in the coming weeks. She said there will be a new hierarchy of road user in London, with pedestrians and cyclists prioritised, and space removed from private motor vehicles if necessary.

Cycle Superhighway decision will be "marker" for London Mayor

Shawcross told road.cc: “I’m really keen the cycling work we do isn’t just about the commuter cyclists, it’s about the little short journeys, not necessarily for work. It might be mums, it might be the retired, so the local communities get the benefits of this.”

She hopes the focus on “improving our streetscapes and our environment”, will allay some of the fears provoked by previous cycling schemes, which she says became at times like a “battleground”.

She said: “The way some of the previous schemes have been consulted on and designed has led to some residents, who don’t see themselves as cyclists, feeling disadvantaged, and I think it’s important that everybody sees that the cycling and walking agenda is for all of us.”

“It’s a health agenda as well.”

Shawcross confirmed both North-South and East-West cycle superhighway extensions will be built, describing the East-West project as “live and active”, but with “maybe a bit of re-routing that needs to be done” following the consultation stage.

She also hinted the routes, which she describes as cycle highways, rather than cycle superhighways, will be better designed.

“I think there are some standards that we can improve,” she said. “Some of the cycle superhighways have weak spots and they have to be retrofitted.”

Changes, she says, will pay “proper attention to the needs of pedestrians in London”, as well as having less impact on London’s bus network, if necessary reallocating road space from private motor vehicles to build more bus lanes.

This is part of a policy shift under Sadiq Khan, Shawcross explains.

“This whole programme does involve having a clear policy priority and that is [from the top of the hierarchy] pedestrians, cyclists, public transport and essential traffic - the freight and deliveries are really important and they’re not going to go away,” said Shawcross, adding TfL is looking into better management of deliveries and freight.

“You will find there are some areas where the road space is transferred from the private motorist to other healthier, environmentally friendlier, more efficient uses,” she said.

“You can get many more people down a narrow road on bikes than you can get in a car, so if we’re short of road space, we’re going to be making some rational decisions in the public interest.”

Of London’s yet-to-be-announced Cycling and Walking Commissioner, Shawcross said some big names were among the many applicants.

“We’ve had a variety of people apply, from journalists to politicians and cycling superstars, so a real range of people who’ve been very involved in the lobby.”

“It’s a great message that people want to come and work for London and work in this role.”

Shawcross said the job has the same pay, the same hours and is the same level of seniority as the previous role of Cycling Commissioner, held by Andrew Gilligan. The Commissioner will work alongside Shawcross in her TfL and City Hall offices.

During Boris Johnson’s term as Mayor the UK’s biggest ever cycle infrastructure project saw construction of four protected bike routes across the city, and improvements to some of London’s most dangerous junctions, led by Johnson’s cycling commissioner, Andrew Gilligan. Road.cc understands Gilligan has not applied for the new role.