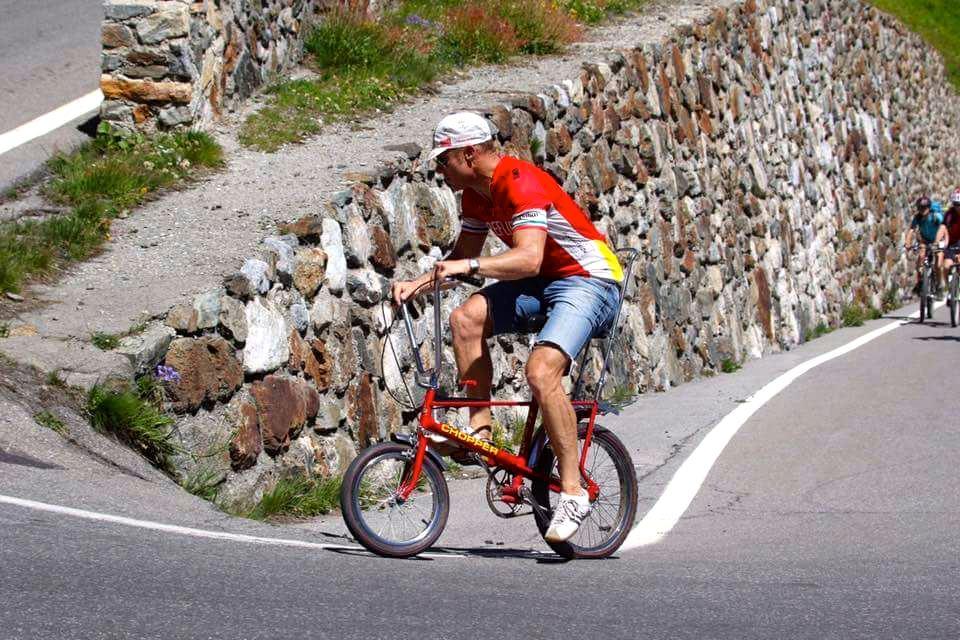 Matt Richardson raises over £2,500 for charity
by Alex Bowden

In 2014, Matt Richardson rode an original 1975 Mk2 Raleigh Chopper up Mont Ventoux to raise money for the cancer charity, Leuka. More recently, he rode the same bike 32km in an hour in aid of the charity Leukaemia & Lymphoma Research. His latest challenge has seen him take on the Stelvio.

An 1,800m climb over 24km, the Passo dello Stelvio is both higher and longer than Mont Ventoux. Richardson did it in trainers, denim cut-off jeans and aviator sunglasses. There’s a video of him taking on the first of the 48 hairpins on his Facebook page. It has to be said, it doesn’t look easy but he’s keen to emphasise that he made it to the top without stopping.

Richardson was raising money for the Fireflies and Bloodwise in memory of his father, David Richardson who died of cancer. At the time of writing, he had hit his £2,500 donation target, but you can still contribute via JustGiving.

Recalling the ride, Richardson said: “As we drove down the mountain to the start, it was as spectacular as it was daunting. Although the average gradient is only 0.2% greater than Ventoux, it looked and felt very different; much more challenging. Whether it was the hairpins or the tumbling cliffs, I don’t know, but it looked nothing like the gradient I was expecting. It’s more consistent overall but it ramps up for the entire second half and particularly at the top, where the air is thinnest.”

After only about 2km Richardson had resorted to Sturmey Archer speed 1. “I knew I wouldn’t be changing back in to second gear at any point. There was nowhere to go now…”

After an hour, Richardson hadn’t yet hit that first hairpin. “Although steep, the first few hairpins were almost a relief. I was in the shade for some of the time and, initially, I thought it would help me because I could count them down from 48. It becomes clear, however, that the counting is meaningless. The distance between the hairpins varies wildly and I couldn’t remember what number I’d done.”

Richardson was aiming to complete the climb in under three hours, but after two he still couldn’t see the summit.

“I became very angry with myself. Not only the usual ‘what am I doing here?’ stuff but also ‘why did I say three hours?’ It seemed beyond possible. I didn’t want to think about it not being possible at all, so I concentrated on it not being possible in three hours; and then argued with myself that it was. Unusually, I didn’t want to think about my father. I knew that if he knew how much pain I was in he would be saying, ‘Just take it easy, it doesn’t matter if you do it in three hours – or even at all: you have nothing to prove.’”

With 3km to go Richardson had 15 minutes remaining to beat his target. With the road steepening, the next kilometre took another five minutes and he said he thought it would be better to fail by 20 minutes rather than by a few seconds.

After taking the last hairpin, he reached the top, missed a parked car by a whisker and arrived in a time of 2 hours 59 minutes and 5 seconds.

Richardson was aided throughout by his friend, John Van Ghelink, who drove in support. As he wheeled the Chopper to the side of the road, he noticed that the rear tyre was almost flat. It had punctured during the climb.

So was the ride fun? Richardson concluded: “For most of the last 3km, I couldn’t control my limbs properly as they were on autopilot, I couldn’t see very much and as I reached the summit I could no longer balance and fell from the bike. I was wracked with cramp, blacked out briefly and spent about 10 minutes on the floor trying to assess the damage and do a bit of sobbing.”

1
RideLondon: tacks strewn on route and angry petition gains traction ahead of sportive's Essex debut
2
Moriah Wilson murder: Colin Strickland ‘in hiding’ until suspect Kaitlin Armstrong found
3
“If the weapon had been a knife or baseball bat the driver might be looking at a prison sentence”: anger over hit-and-run driver's assault on cyclist
4
Shimano forces SRAM-owned Hammerhead to remove Di2 connected features
5
“Drivers have a responsibility to protect vulnerable road users”: Hi-vis police officer close passed by lorry driver
6
Near Miss of the Day 773: Close pass driver sent warning – then “brags they got away with it”
7
“I wholeheartedly disagree with his approach” – YouTube driving instructor Ashley Neal on CyclingMikey
8
Key Bristol cycle lane to be scrapped – because council claims it causes flooding