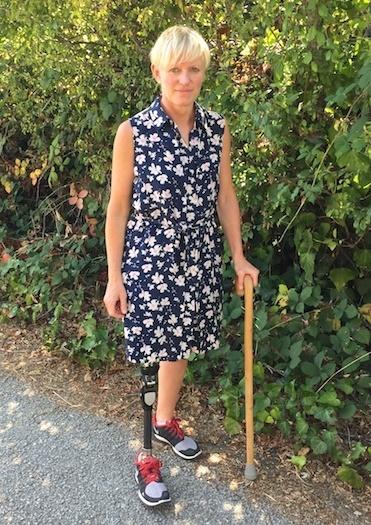 Julie Dinsdale, who lost a leg when she was crushed under the wheels of a Tesco lorry in Central London last year, has said she is hugely disappointed by the penalty handed out to the driver responsible. 23-year-old Florin Oprea was fined £625 and given five points on his licence after pleading guilty to driving without due care and attention.

Dinsdale was riding her bike on Old Street in the London Borough of Islington with her partner – mountain bike industry pioneer, Keith Bontrager – when the incident took place on the afternoon of Sunday October 4.

The NHS midwife was crushed under the wheels of the lorry as it turned left, across her path, into Central Street from Old Street. Her leg was immediately amputated by the front nearside wheel.

Blackfriars Crown Court heard that Oprea had been driving in the UK for four months before starting work for Tesco on October 1, just four days before the incident. He had held an HGV licence for 18 months but had mainly been working in Italy prior to his arrival in the UK.

The collision took place on Oprea’s first day working alone. Just days before, an assessor had recommended that he use his nearside mirrors more when driving.

It was also alleged that Oprea was not following the route provided by Tesco. Oprea argued he had been following his satellite navigation system through Central London.

In a victim impact statement, Dinsdale said she had previously participated in marathons and cycling events, including completing the Three Peaks Cyclocross event for the sixth time in the week before the collision.

“I am hugely disappointed by the decision of the Court which finds that despite the evidence that I was visible to the driver, he should not be handed a more substantial sentence given the impact his actions have had on my life.

“Every aspect of my life remains difficult and my inability to return to work or pursue my sporting and active lifestyle is an immense loss to me and causes me great distress.

“What is of greatest concern to me is that the driver continues to drive HGVs and it was said during the recent Court hearing that he was now working for Stobart. What has happened to me is devastating and I would hate for someone else to go through the same.”

Dinsdale’s lawyer, Sally Moore, Head of Personal Injury at Leigh Day, said a civil legal action would now be taken against Oprea and Tesco, adding: “It remains a problem at the core of British society that serious collisions involving cyclists are still regarded as ‘par for the course’ and appear to be treated as such by the Courts.”